It also helps you see your own culture from a different perspective.

“You won’t know your own culture or language until you learn another language or culture,” says Keiko Konoeda, a lecturer in Japanese whose research focuses on teaching languages.

“You can be immersed in the language,” Konoeda says. “There is a strong community for that.” 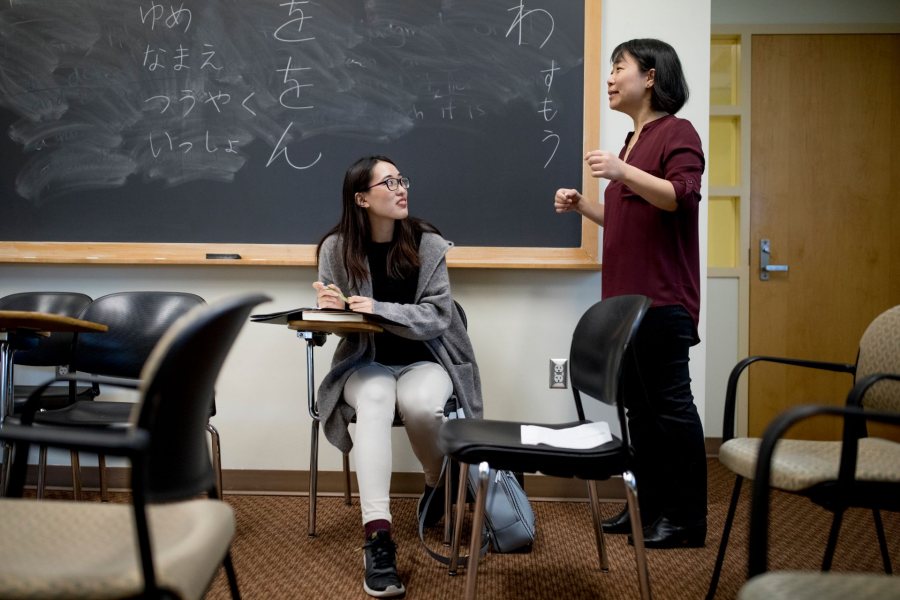 We asked foreign language faculty and student tutors about their best strategies for learning a new language, whether it’s French, Japanese, or ancient Greek. Here’s what they said.

1. Immerse yourself in any way you can.

Immersion is speaking, listening, and thinking in a new language as much as possible — but that doesn’t mean you have to go to a country where the language is spoken, says Michael Lombardi ’21, who tutors Japanese in the Academic Resource Commons.

Plenty of resources are available right on campus, such as “going to language table sessions, seeing your ARC Peer Tutor, and immersing yourself in the vibrant Bates community,” he says. 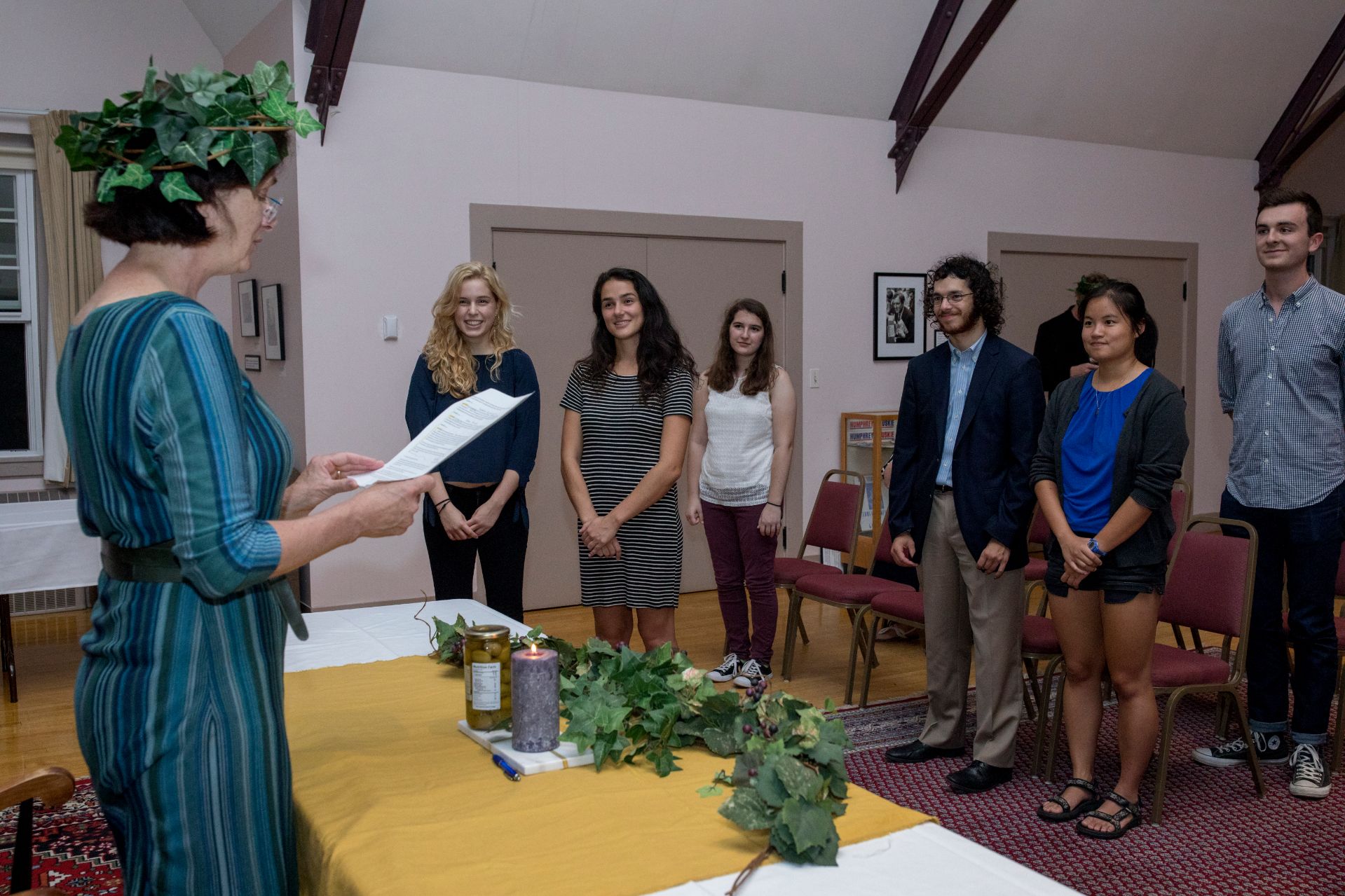 Laurie O’Higgins, Euterpe B. Dukakis Professor of Classical and Medieval Studies, presides over an induction ceremony for the classics honor society in 2017. (Phyllis Graber Jensen/Bates College)

Ancient Latin and Greek are somewhat different from modern languages, says Laurie O’Higgins, Euterpe B. Dukakis Professor of Classical and Medieval Studies — the learning focus is often on reading, rather than speaking and listening.

O’Higgins recommends setting aside quality time with the language. “Give 20 to 30 minutes, six days a week, to learning new forms and vocabulary. Those must be the best 20 to 30 minutes you can spare, when your brain is at its best. Have the environment as quiet as is possible. Focus exclusively on saying the words, reading them, and writing them too, if it’s Greek. Then stop.”

“The best students practice writing by hand, read grammar explanations, listen to audio, practice speaking on their own, practice speaking with others, watch movies in the target language, and even practice acting out verbs or adjectives with their faces and bodies,” says Justine Wiesinger, assistant professor of Japanese.

Language-learning resources are particularly abundant in libraries, says Associate Professor of German Raluca Cernahoschi. “All the major newspapers have an online presence, and Ladd Library has a good selection of print newspapers and magazines in several languages. There are international editions of all major fashion magazines and many more online resources.

“Have a favorite novel? It’s probably been translated into your new language, too. The resources are endless and often only a click away.”

“People are wired to remember rhythms and rhymes — song lyrics in a new language can help build vocabulary and grammar. My advice is to find a band you love to listen to in your target language,” Michael Lombardi says. “You’d be surprised by how much variety there is out there!”

Dennis Browne is an associate professor of Russian who’s been learning German for several years. Browne likes to rehearse personal stories — for example, learning car-related vocabulary in order to talk about a time his car broke down — and tell the stories to native speakers of German. 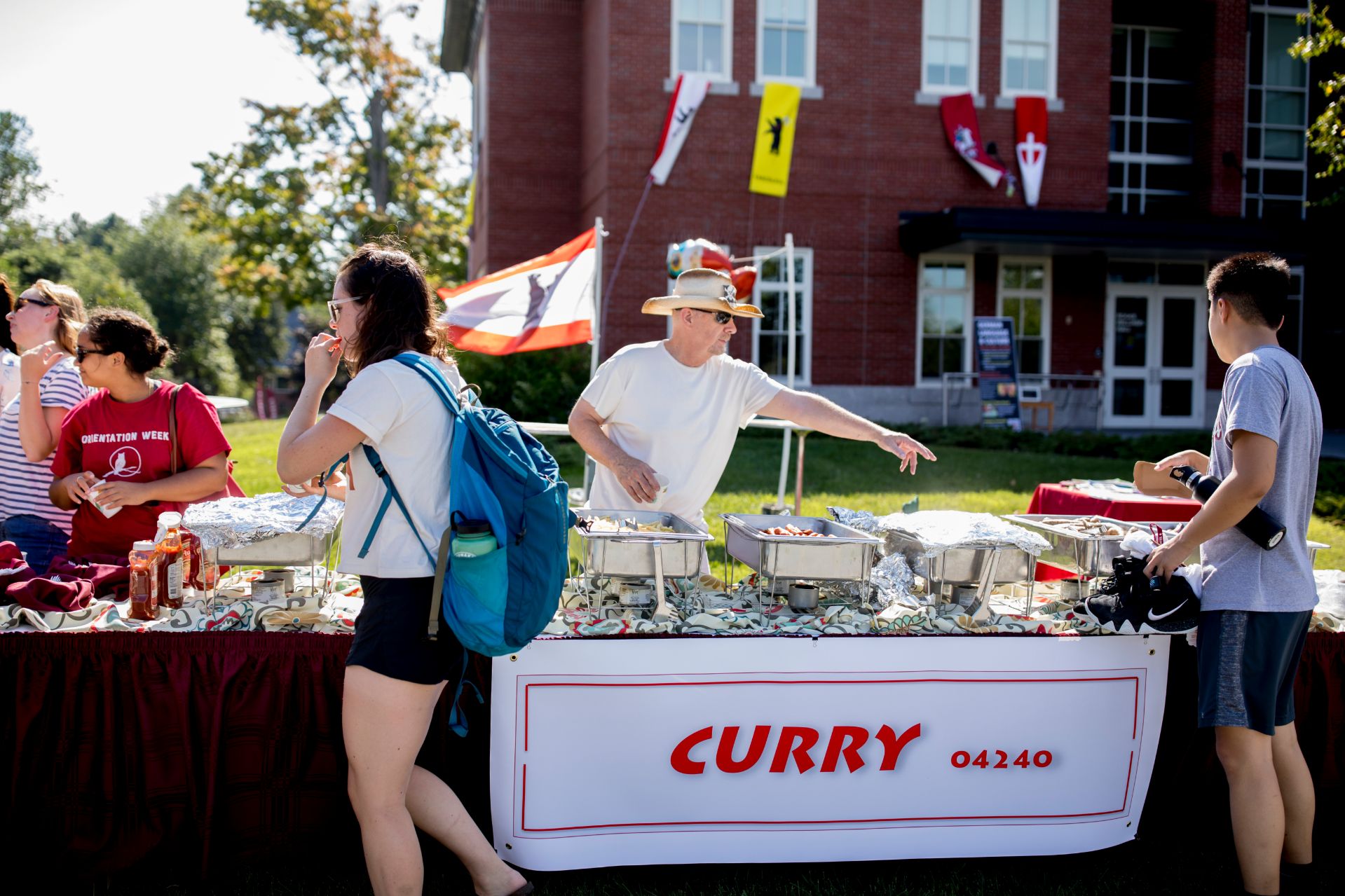 Associate Professor of Russian Dennis Browne serves sausage during ”the Wurst day of the semester,” an open house for the Department of German and Russian Studies. An associate professor of Russian, Browne has studied German for years. (Phyllis Graber Jensen/Bates College)

“You tell that story and find they don’t use those words in everyday German,” Browne says. “That’s useful because you realize that there are these technical terms, and then the terms people actually use.”

Especially when a new language has a different writing system from English, it helps to associate feelings, images, and narratives with concepts you’re learning, says Wiesinger.

In kanji, one of the Japanese writing systems, characters represent things or ideas as opposed to sounds. Research has shown that narratives help with memorization — for example, Wiesinger encourages her students to think of the Japanese character for charcoal, 炭, as made up of symbols that look like a mountain, a cliff, and a fire.

“If you can imagine the shape of the mountains as you climb and the coolness you feel on your skin as you walk out onto a cliff, and then the smell of the charcoal fire you kindle, it will help retain the elements of this character in your mind and help distinguish it from similar characters, such as 岩,” which means rock, Wiesinger says. 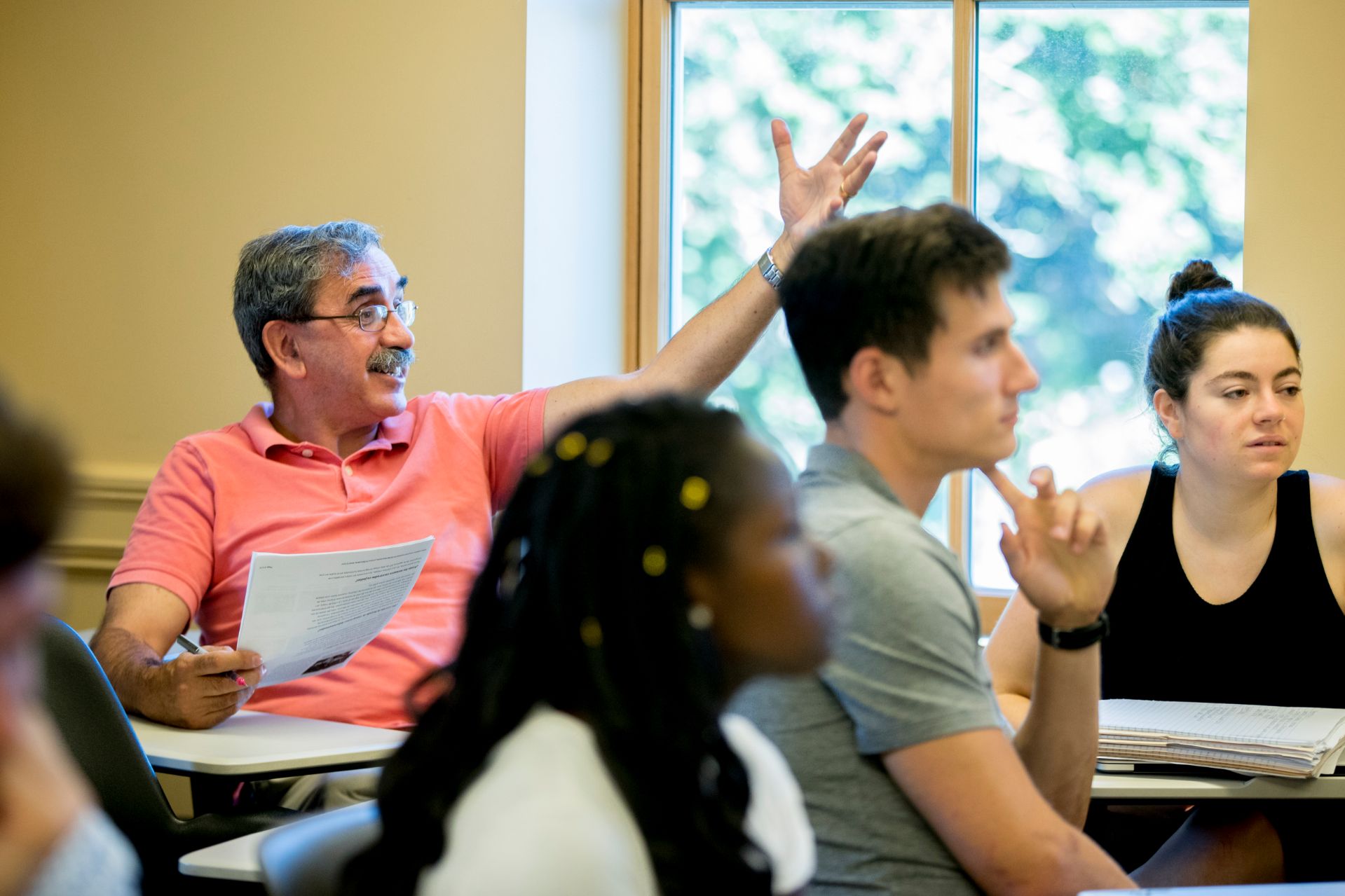 Language learning happens in community, says Professor of Spanish Baltasar Fra-Molinero. “You learn a language not speaking to another person but by speaking to two, three, four, five other people. That’s how the process of language acquisition happens.”

“I recommend note cards or notebooks and keeping them neat and up to date,” says O’Higgins. “It’s not high-tech, but it works.”

Katherine Ziegler ’19 of Katonah, N.Y., who tutors Latin in the ARC and minors in German, heightens the tech just a little. “I really like to use sites like Quizlet to learn new vocabulary,” she says. “Quizlet is a website that allows you to make your own flashcards and then quiz and test yourself in a variety of ways. This is particularly helpful for Latin, which involves a lot of memorization.”

“I like to have a little notebook to write down new vocabulary, grammar paradigms, writing exercises or diary entries in the target language,” Ziegler says. “It’s also a nice place to write down any poems or phrases that you like. This helps remind me why I’m learning the new language in the first place.”

Well, not really, says Kirk Read, professor of French and francophone studies. But he recommends copying native speakers’ words and forms as much as possible. “Imitating good syntax, playing with it, feeling it and how it guides your thoughts, is the way to go. It will get you away from word-by-word translation, which is silly, wrong, and ineffective, though often hilarious.”

“Stop thinking,” says Read. “Language learning the first time you do it is all about hearing, mimicking, reproducing. No child ever turned to their parent and said, ‘How do I conjugate that verb?’”

Mary Rice-DeFosse, also a professor of French and francophone studies, asks students to “give up total mastery” once they’re at the intermediate level.

“It’s important that students not look up every word and instead begin to get the gist of a reading based on what they think they understand,” she says. “My job is to provide a safety net as they develop that skill. Eventually, they start to think — and even dream — in French.” 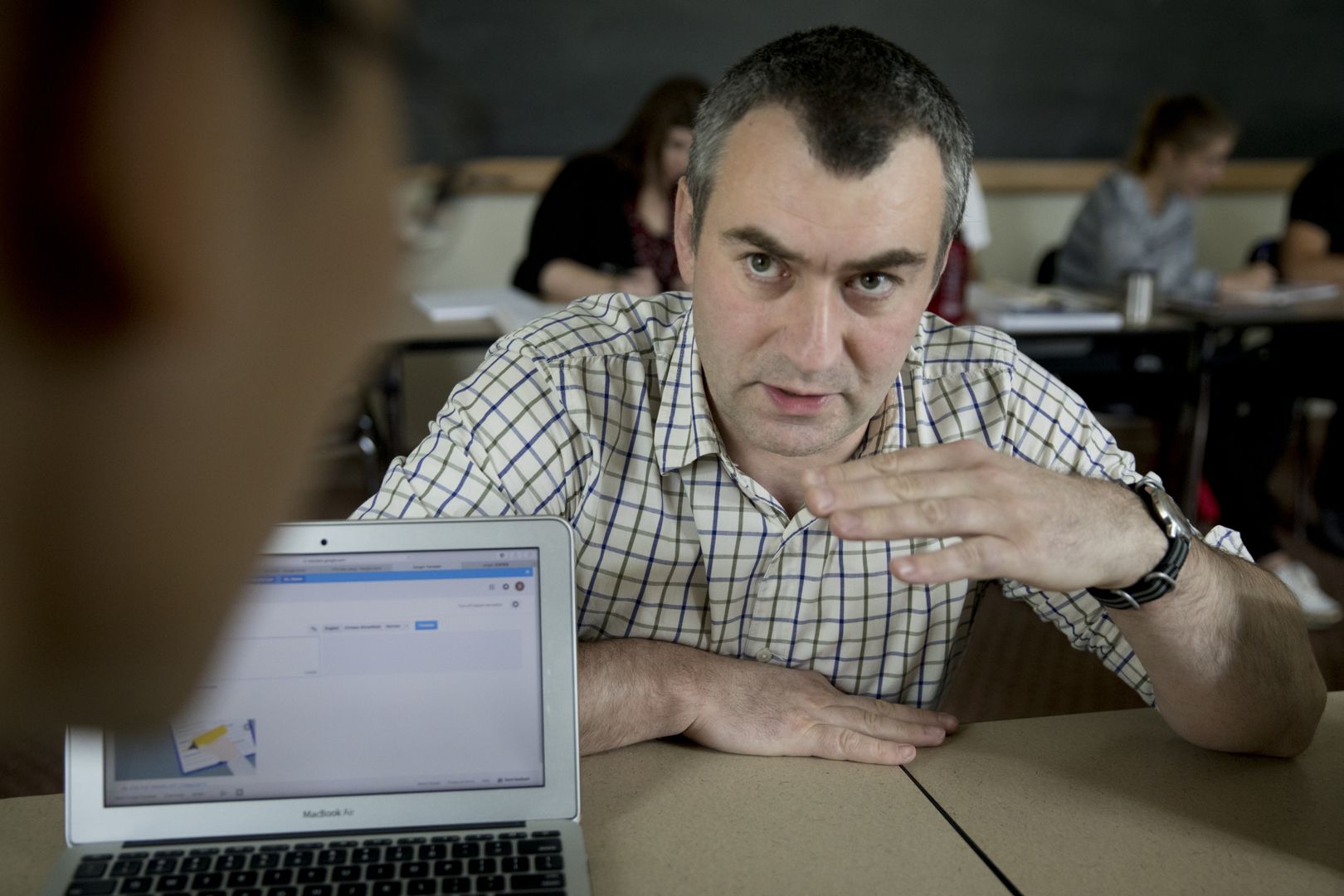 “Put sticky notes with new vocabulary on furniture and your belongings in your room, listen to a lot of news and podcasts in the language, pick up a few lines from songs and sing them out loud, enjoy any silly language joke you can find,” says Associate Professor of German Jakub Kazecki.

“Because, you know, the German sausage is the Wurst.”

”Learning a new language can be greatly intimidating or even feel embarrassing when you mispronounce or misuse a word, but the more you practice it out loud — whether that’s in class, with your roommate, or with a peer tutor — the easier and the more comfortable it begins to feel,” says Claudia Glickman ’19 of Houston, a student tutor of German.