After 30 months of applying to the construction of Bates’ Bonney Science Center countless tools, from pile drivers to 3D computer models, what came to hand for finishing the job — at least symbolically — was three pairs of really big scissors.

With a champagne toast and synchronized chops from those ceremonial shears, college President Clayton Spencer and lead donors Michael Bonney ’80 and Alison Grott Bonney ’80 snipped a garnet ribbon on Aug. 23 to declare the science center open for business.

“Let’s raise our glasses to discovery and happiness,” proclaimed a smiling Spencer, “and to the Bonneys and all the other donors and contributors who have helped along the way.” (And it does make a certain kind of sense that you’d cut ribbon to wrap up a project.)

The ceremony capped months of intense focus on readying the building for its inaugural school year. And it took place just a week after the last of the faculty occupants moved in. They were biologists Lori Banks and Ryan Bavis — the latter a co-chair, with Vice President for Finance and Administration Geoff Swift, of the committee that steered the planning for the Bonney Center and related projects.

Weather sent the ribbon-cutting inside, to the foot of the so-called Monumental Stair. All masked up, dozens of people close to the project attended the event, which began with remarks in a classroom and then moved to a spiffy lounge, the Living Room, for refreshments and the ribbon ceremony.

“Five years ago, Alison and I had a view that a more science-literate society was something [the nation] had to have,” Mike Bonney told the gathering — a view now set in stone as the Bonney Science Center. “And you just have to look at the headlines every day to understand how society would benefit, in the U.S. and globally, with more science-literate members.”

He concluded with a shout-out to Bavis, who, he noted, led the faculty effort to design this building. “I had a minute to see him before we came into this room and he said, ‘Mike, it’s what we envisioned.’”

President Spencer thanked folks whose contributions helped make the Bonney Center a reality — folks such as donors; Bates’ Swift, Director of Capital Planning and Construction Pam Wichroski, Senior Project Manager Chris Streifel, and Construction Administrator Jacob Kendall; and staff at construction management firm Consigli and building design firm Payette. In its sophistication and complexity, Spencer pointed out, “this was not an easy building to build.”

Michael Hinchcliffe, a principal at Payette and lead designer of the Bonney Center, told a nice story about some tools, gathered over the years, that his father gave him as a housewarming gift.

His father told him, “This is a set of tools that you’ll need. Whenever you try to do something, use the right tool. It will help you make the work good. It will make the work easy and it will allow you to take pride in your work.”

“For me,” Hinchcliffe said, “the Bonney Science Center today is a little bit like those tools. It is a gift that the Bonneys and the other donors are giving Bates today to solve problems, to create things that we can only dream about.”

The center, Hinchcliffe continued, “will launch the careers of countless new scientists, starting with the spark of inspiration from the amazing faculty here. It will be a place where every student at Bates will gain an inspiration and a foundation in knowledge and facts and science.”

Earlier in the day, Campus Construction Update asked Streifel what was left to say about the Bonney project. “Bring on the students!” he replied.

But it’s also true that, over the next year or so, “there’ll be a process of identifying what I call enhancements or sometimes ‘Day Two’ items.” As in, “We need five more stools over here. We need a bookshelf over there. These tables are great, but they don’t work.”

He said, “A lot of that kind of stuff is starting to percolate onto lists, and we’ll be absorbing it.” 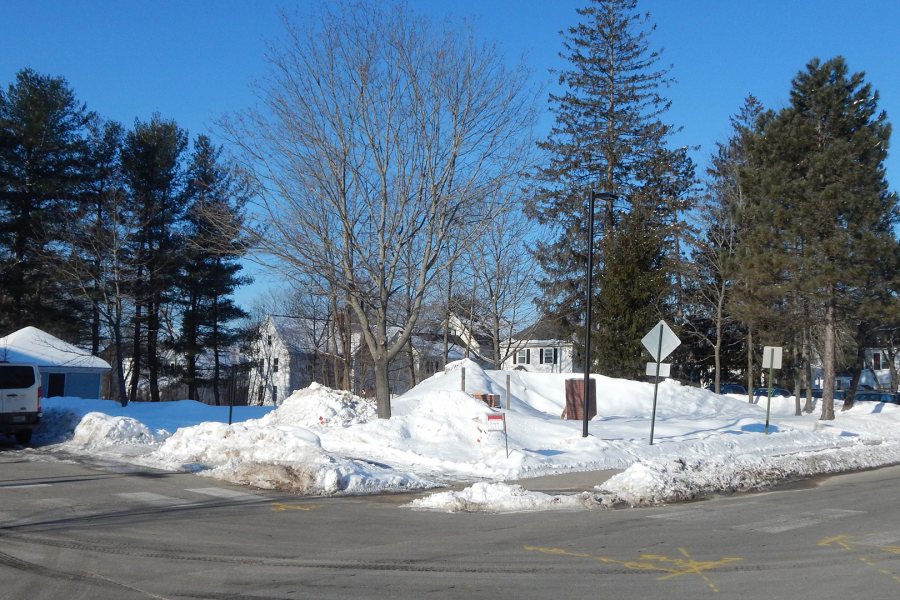 Demolition derby: Meanwhile, if Streifel is still busy with Bonney, what’s brighter on his radar screen these days is the repurposing of Dana Chemistry Hall. Interior demolition began there in July — at which time, moreover, a construction zone was established that blocks foot traffic between Dana and Hedge, and along the service road behind Ladd Library. (Don’t say we didn’t warn you!)

As we’ve written before, the Bonney Center resulted from a strategic process, begun in 2016, in which Bates engaged Payette to help reconfigure campus science facilities to better meet evolving needs. The rebuilding of Dana is a second result of that process. (And a third will be a variety of upgrades to Carnegie Science Hall. The three projects together are budgeted at some $75 million.)

Overall, Payette’s goals with the Dana overhaul are, first, simply to make it a friendlier building; and second, to transform it into a teaching center with an emphasis on introductory science. The first floor will be dedicated to intro chemistry, and the third will house biology labs and a general-purpose teaching lab. The second floor, Streifel explained, “becomes three beautiful, large, general-purpose classrooms.”

“One reason that Dana was a good candidate for this renovation is that [classroom locations are] not chopped up by structural elements” such as load-bearing columns. “So classrooms can be sizable. And there are good windows all around the perimeter, so they’ll be well-lit,” he continued. “And it’s right in the corner of the Historic Quad, with all the students coming through, right where we want classrooms.”

Structurally, the project entails the removal of some central interior masonry walls and other partitions to improve sight lines and traffic flow. As Streifel explained, “The core right now is a maze of small spaces.”

So while two load-bearing masonry walls and some other features will stay put, “almost everything else is removed. And that’s a lot of masonry and old partitions. The goal is to free up that core for a more transparent building,” in keeping with the openness imparted by glass and open space inside Bonney.

Payette’s aesthetic touch will be evident in other ways, too, in the new Dana. “You’ll see a lot of the same design themes and materials, and a lot of the equipment will be the same,” said Streifel.

As of this week, what was destined for removal has been removed from Dana’s basement and the attic, more or less. That’s especially true for the attic, which for decades was filled with air-handling machinery and storage spaces but at the moment resembles, as much as anything, the inside of a barn — a lot of bare boards.

“Just a few months ago, faculty were still working in that building, and now it’s barely recognizable,” said Streifel. “When I go in the attic, I’m blown away by it — ‘This is the same building?’”

Happening next is the placement of new insulation and wallboards over the old naked wood of the roof and walls, and then, in time, the installation of new HVAC machinery.

The basement, meanwhile, is where building-wide electrical infrastructure will live. But first, floor drains need to be installed and that’s going on now: Neat trenches have been cut into the concrete floors into which the drain fittings and the pipes will be set.

And what of levels One through Three? Demolition continues, followed by hazardous-material abatement. Demolition in progress looks like hell — ceiling tiles on the floor, wall fixtures and furnishings yanked out of place, ripped-out cables and other debris strewn around — but actually performing the work must be a cathartic kind of fun, at least for the first 30 minutes.

Lakeside Concrete Cutting and Abatement of Newport, Maine, “is doing all of the demo and abatement, which is a pretty sizable package,” said Streifel. “They’ve got another a month and a half roughly of demo and abatement before the building is truly done with that and we’re fully engaged in the rebuilding process.”

This halyard ground: Knocked noticeably out of plumb by a falling tree years ago, the old flagpole in front of Hathorn was replaced in July.

Bates’ longtime flag supplier, locally owned TriState Flag, provided and installed the new pole. Strong and lightweight, at least compared with the old metal pole, the new pole is a fiberglass “Zeus” model made by PLP Composites in Fitzwilliam, N.H. Like the pole it replaced, the Zeus is about 60 feet high.

As we’ve previously noted, sand is a sort of Swiss Army Knife of construction materials (another metaphor that never should have left the factory!), and it plays a crucial role in the world of flagpole installation. A pole is set into the ground within a cylinder that’s just a little wider (do they call it a pole vault?), and the gap is filled with sand.

While some workers ensure that the pole is kept plumb, others thump the pole with a rubber mallet to compact the sand with the vibrations. To finish, the circumference of the pole at ground level is tightly sealed against moisture.

Later, if you need to remove the pole, you can just vacuum out the sand.

Another familiar firm, Carrier Landscaping, tended to new land- and hardscaping around the pole. “We also had support from the grounds crew, electricians, carpenters, and others in Facility Services, so the project has been a real team effort,” said Jay Phillips, director of facility services operations.

The original flagpole was presented by the College Club and the Alumni Fund in June 1931, accompanied by a plaque inscribed “One Flag, One Land, One Heart, One Hand, Our Nation Evermore.” Ninety years later, the Class of 1967 has made the funding for the flag pole part of its 55th Reunion giving effort.

Two updates to Hathorn Hall are more or less complete. Inside, new chalkboards have been installed in a few classrooms, a process that exposed older blackboards that still bore faculty scribblings from who knows when. That work also entailed the replacement of ceiling tile and refinishing of walls and trim.

On Hathorn’s roof, new slate, copper, and rubber coverings are in place. “The existing roof decking is in amazing condition after many years under the old slate,” noted project manager Bob Leavitt.

In the Olin Arts Center Concert Hall, Deblois Electric has replaced all the old incandescent lighting fixtures above the audience seats with energy-efficient LED units. An early concern was the potential high cost of erecting conventional scaffolding to elevate the electricians to ceiling level, but project manager Paul Farnsworth found a reasonably priced provider of structures specifically for lamp replacement projects in awkward spaces like churches and auditoriums: LightbulbScaffold.com of Shreveport, La.

Over at the campus heating plant, the conversion of Boiler No. 3 to burn carbon-neutral LR-100 vegetable oil has been briefly paused due to delayed delivery of the inline fuel heater. That should arrive by the end of September, and testing is slated for early October.

Finally, project manager Shelby Burgau reports that the installation of new MODAL flooring and new batting cages in the Gray Athletic Building is complete. “There were no surprises and everything looks great.”

Can we talk? Campus Construction Update welcomes queries and comments about current, past, future, timeless, and “that never happened — or did it?” construction at Bates. Write to dhubley@bates.edu, putting “Campus Construction” in the subject line. And Fran K. for reading this month’s CCU!