RecycleMania, held during February and March, encourages colleges and universities to reduce and reuse their waste.

Bates placed 12th out of 169 schools nationally for Food Organics, a measure of how much food waste is donated, composted, or otherwise diverted; and 28th out of 171 schools for Diversion, which measures the total waste diverted away from landfills or incineration.

The college’s EcoReps, students who lead sustainability-related projects on campus, spearheaded Bates’ participation in the competition. But they’re not resting on their RecycleMania laurels.

“The results show us what areas we need to work on and more of what we need to do in the future,” says Olivia LaMarche ’20, who is in an EcoRep group focused on waste and recycling. “It’s a really good benchmark.”

RecycleMania encourages recycling across several categories. Three hundred colleges and universities across the United States and Canada, with a total enrollment of 3.6 million, recycled or composted 68.6 million pounds of waste during the Feb. 4–March 31 competition.

Bates and the EcoReps have made concerted efforts in recent years to reduce waste on campus, including installing standardized bins for sorting waste, eliminating paper coffee cups in Commons, and hosting “No Waste November” events around the ever-popular annual Trashion Show. 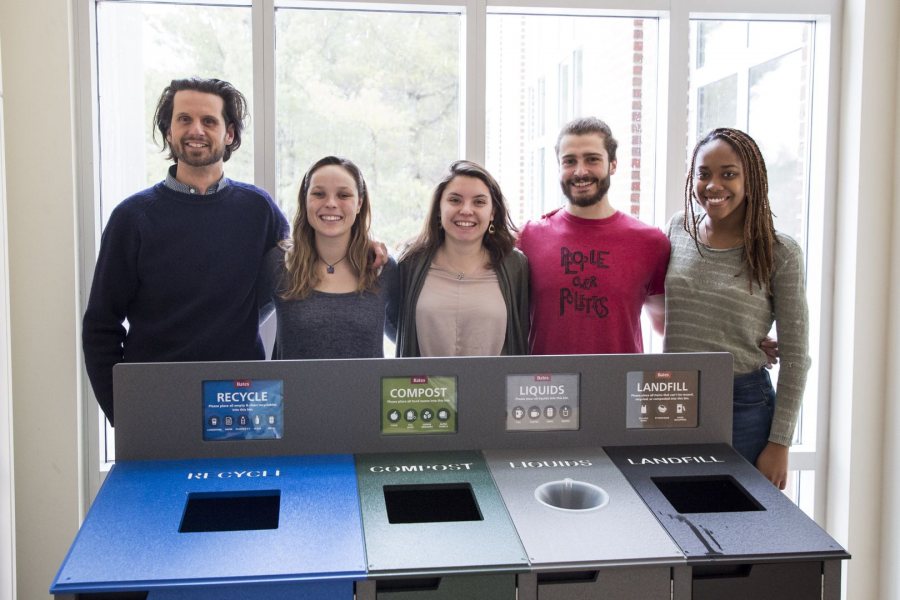 Bates’ strong RecycleMania numbers show that the college is doing well in an area that often proves a tough nut to crack: changing people’s behavior.

“We’ve been putting a lot of thought into waste reduction, such as standardization of bins, and these numbers would suggest that it’s working,” says Sustainability Manager Tom Twist.

Using receipts from the local companies that take Bates’ waste to area landfills, recycling centers, or composters, the EcoReps were able to measure how many pounds of waste the campus produces and where the waste goes.

But to reduce those numbers as much as possible, the EcoReps had to get other students informed and on board. So they took to Commons in February and March, explaining RecycleMania and asking waste-related trivia questions. Such as:

The EcoReps also devised a waste-reduction competition among Bates residences, with a bagel breakfast as a grand prize. To get dorm-specific waste information, the EcoReps teamed up with an environmental science class to conduct waste audits, sifting through trash and recycling bins to figure out what students throw out and whether they throw it in the right place. (The winners of that competition are yet to be announced). 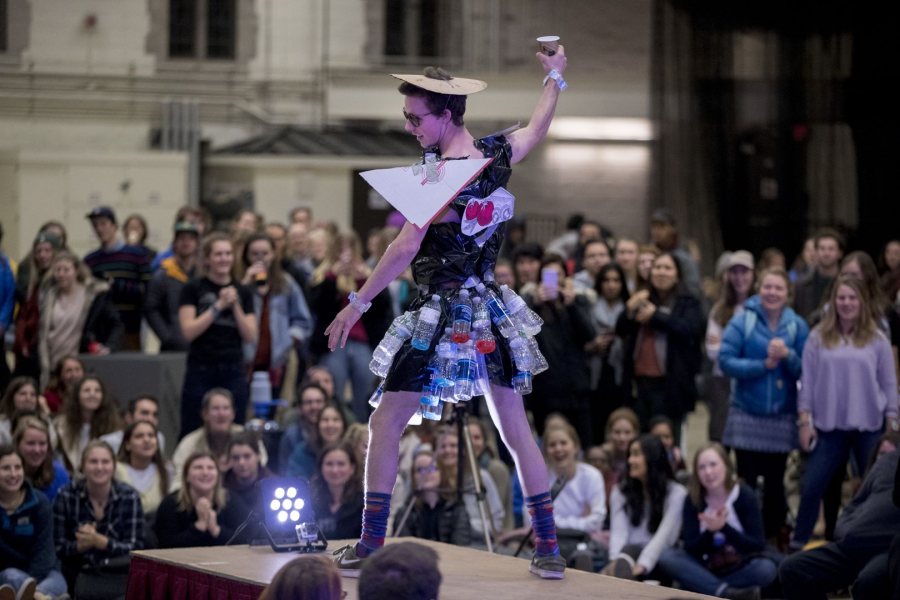 During the 2017 Trashion Show, Domi Frideger ’21 models an outfit designed by Sarah Sachs ’18 and Olivia LaMarche ’20. The outfit was meant to highlight that food and liquids don’t go with other recyclables. (Phyllis Graber Jensen/Bates College)

“It’s a great eye-opener for the students to see what was in there, in some cases seeing if it’s being sorted poorly or not,” Twist says.

The success of the RecycleMania effort, as with every sustainability initiative at Bates, was due to collaboration across campus. Dining Services has long worked to divert food waste, and the college’s Facility Services staff helped the EcoReps to make accurate waste audits possible.

“They adjusted their whole schedule and were able to set aside the waste and recycling for us for that day, which is a pretty big disruption,” Twist said. “We’re grateful that they did that.”