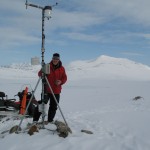 The glaciated high arctic study site in west Spitsbergen is located at 78o at the northern end of the North Atlantic current, a sensitive area for detecting and monitoring changes in the cryosphere, the frozen part of the planet. I am interested in the glaciation and sea level history in Svalbard and other aspects of climate and environmental change in this high arctic setting. My colleagues and I have developed a long term monitoring site in Linnedalen, a valley in western Spitsbergen. This study site is well equipped with instrumentation from the top of the glacier to the bottom of the lake and includes weather stations, glacier stake network, time lapse cameras and arrays of instrumentation in the lake, all designed to detect timing and nature and changes in seasonal cryospheric processes.From 2003 to 2014, I was a co-leader in the Svalbard REU program: Holocene and modern climate change in the Norwegian High Arctic sponsored by the U.S. National Science Foundation Office of Polar Programs. The research program in Linnedalen is now as a course in the Arctic Geology Department at UNIS, the University Centre in Svalbard and involves an international cohort of student researchers.

Check out this link for info on a new three year project in Svalbard, in collaboration with Prof. Ray Bradley, UMass Amherst http://www.umass.edu/newsoffice/article/umass-amherst-study-changes-arctic 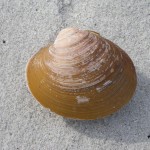 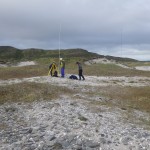 This collaborative project was funded in 2014 by the National Science Foundation in cooperation with colleagues from Iowa State University, Norway and the Netherlands. One of the main goals of this study is to reconstruct late Holocene marine climate from northern coastal Norway using environmental information archived in long-lived clams. Arctica islandica , a common North Atlantic bivalve, can live up to 300 years or more and has well-defined annual growth increments – and we are attempting to reconstruct maritime climate from Medieval Time through the Little Ice Age to recent period of warming of the 20th Century by studying patterns of inter-annual growth and using stable isotope analysis of the annual layers. The study area along the north Norwegian coast is in a sensitive area for changing marine climate as it is bathed by the northern extent of the north Atlantic current (aka the Gulf Stream and changes in heat transport by the current may be responsible for major climatic shifts in the late Holocene. As a geologist on the interdisciplinary research team, my role is to investigate raised beaches, above current sea level. isolated from the sea by postglacial uplift of the land. The raised beaches contain clams up to 6,000 years old and will allow us to investigate marine climate beyond the last millennium. 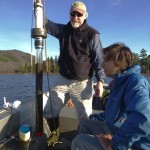 Bates is located just south of “the lakes region” in south-central Maine.  My students and I have undertaken numerous projects in courses and in thesis research on many lakes ranging from coastal “isolation basin” lakes that were formerly depressed below sea level to density stratified lakes that contain laminated sediments that archive high resolution sediment records. One of our study sites in central Maine is Basin Pond, a 30 meter deep “meromictic” lake. The water column in this lake is permanently stratified and has a detailed sediment record of environmental change with annual resolution preserved in the finely layered deposits, similar to tree rings. 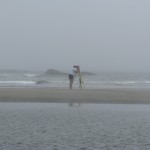 for geological research on the undeveloped barrier beach system.  In 2009 we began a more intensive monitoring program on beaches in the Phippsburg area, in partnership with the Small Point community and Popham Beach State Park. The focus of the beach research is to monitor and evaluate the response of the sandy beach systems to changes brought about by storms, seasonal wave climate and rising sea level. Beach profiles and dune fronts are monitored using high resolution GPS, total station and traditional auto-level surveys in addition to time lapse photography from cameras installed at two of the beaches.

We have developed a Coastal Environmental Archive in collaboration with the community at Small Point. This archive will continue as an ongoing project designed to document change in the Maine coastline. Highlights of the archive include a collection of relevant undergraduate senior theses, satellite and air photographs, and a collection of historical photographs donated by the Small Point residents. Please visit the archive by following this link: https://sites.google.com/a/bates.edu/sea-wall-project/

Nicole Cueli Recent Changes To The Dynamic Sandy Beach System At The Mouth of the Kennebec River, Mid-Coast Maine

Sarah Mazur : Sedimentological records of storms and climate in the Quendale Region of the Shetland Islands, Scotland

Christopher L. Cary: Modeling of sedimentation trends on Seawall Beach in Phippsburg, Maine, and their variations over daily, weekly and seasonal timeframes