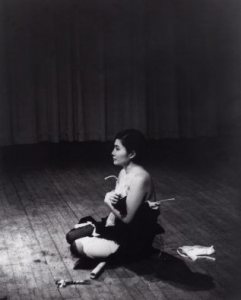 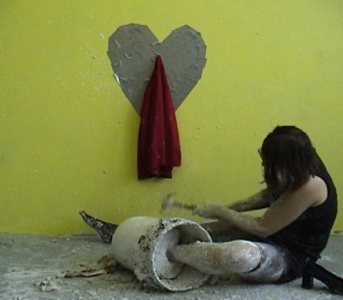 A recent exhibition at the Bates Museum of Art titled “In Yor Way,” focused on Kate Gilmore, a feminist performance artist famous for her videos that depict women struggling against a barrier. For example, Kate is depicted in an enclosed space, her foot encased in a cement bucket, or a group of women tearing down a large piece of clay. In these videos the women are dressed in the most conventional feminine attire- floral dresses, high heels and red lipstick. The pieces, often featuring Gilmore herself, are meant to be a commentary on the everyday struggles women face in today’s society. Gilmore is not afraid of putting herself in dangerous positions for her art, and because of this she is known for pushing the boundaries of a classic performance art piece. Last fall semester I had the privilege of working on Gilmore’s exhibition with the museum’s director, and through research I discovered another female performance artist, Yoko Ono, who similarly pushed the boundaries of what art can be, in order to inspire wide social change in her audiences.

Yoko Ono is a female Japanese performance artist who is well known for her multimedia performances, songwriting and peace activism. She is also the second wife and widow of John Lennon- the couple together did several performances including their “Bed-ins for Peace”. Her relationship with The Beatles star is often how Ono is remembered, however the way she pushed the boundaries of performance art is arguably more notable- one of the performances that exemplifies Ono’s daring is “Cut Piece” from 1964.

This piece was first performed in Tokyo in 1964, and was performed at least four more times in Japan, London and the United States. Ono kneels on an empty stage with a pair of scissors in front of her. She says nothing except to outline the parameters of the performance- the audience members are welcome to come on stage one by one, cut off any piece of her clothing and take the piece back to their seat as a souvenir; the ending of the performance is decided by Ono in the moment. At first, the audience is hesitant- they come up and cut small pieces of her shirt or skirt and hastily return to their seats. However as the performance goes on, they become bolder. A man comes up and cuts off the front of her bra, and another cuts off the strap- at this point Ono brings her hands up to cover up her body. It continues like this for some time before Ono ends it.

This performance is meant to bring the audience into the work itself and have the artist and the audience interacting on an intimate level. Art to Ono is no longer about the artist giving the audience the established, final product. It is instead about the audience influencing the art. There is also never a definitive ending, only one chosen by Ono, and the duration of the performance changes with the audience. It is a constant and fluid piece of work, one that continuously surprises the viewer. There has been analysis done that imagines this piece is a protest against war, particularly the atomic bombing of Hiroshima. The way Ono’s clothing is cut and torn replicates the clothing of the people of Japan after the bomb fell. Her intention to have audience members take souvenirs home is to have this performance continue on in the world even after she says her part is done. There is hope that audience members will look at their cut pieces of clothing, remember the turmoil caused by war, and change their actions to bring about peace.

Watching this performance is an almost ritualistic experience- the silence from Ono is countered by the nervous laughter and hushed voices of the audience. The way she is kneeling brings up images of how Japanese women are taught to sit. Although she was poor at the time and did not have many expensive pieces of clothing, Ono chose to wear her best outfit for each “Cut Piece” performance. She believed that the audience should be getting the best souvenir they could have; after all they are as big a part of the performance as she is.

I highly suggest readers watch recordings of this performance. It is both a spiritual experience as well as a lesson on the cost of war and the necessity for peace.

For more information on Ono’s Cut Piece, check out the Museum of Modern Art’s Learning section at: https://www.moma.org/learn/moma_learning/yoko-ono-cut-piece-1964