As the winter semester winds up and the internship concludes, I realized I would have never known about the different roles and jobs in a museum and how they collaboratively optimize its functions and performances, and the viewers’ engagement with each exhibition without having the opportunity to work as an intern in a museum. This semester, I was exhibitions intern in the Bates Museum of Art, under Director Dan Mills. My decision to apply came from a conversation I had with Art and Visual Culture Professor Pamela Johnson at the end of last semester. We deliberated on courses I may be interested in, and what might help me make the transition from my current studio practice to design, the field I am interested in having a career in. I thought an exhibitions internship could be helpful. In the design industry, ideas of space and placement of things are of quintessential importance. I rejoiced when I got the internship, and the semester’s experiences have helped me as a developing artist and designer. 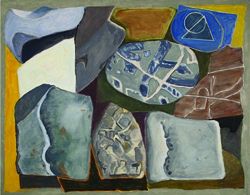 During the semester, I worked on two different but related tasks. I spent the first half of the semester doing lots and lots of research. On my first day, I was given a list of artists and bodies or series of work in the museum’s collection that have not been featured in an exhibition. After reviewing the works, I narrowed the list to three artists whose works appealed to me the most: Bruce Conner, Joseph Fiore, and the IRWIN Collective, (a group of Slovenian artists). For the first several weeks, I spent several hours in the Synergy Space studying the work of these three artists, researching the work visually. I learned from Collections Manager Corie Audette how to handle art works carefully with gloves and a palette knife; I treated them like how I would treat my kids, if only I had any. I kept a journal, jotting down observations on techniques and subject matter, etc., and trying to analyze and interpret their meaning before embarking on research about the artists and their work. 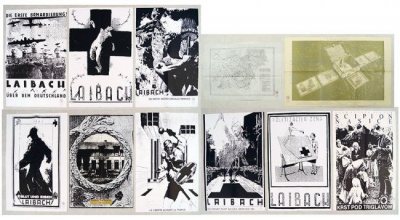 Joseph Fiore is an artist who made paintings and drawings that were naturalistic, abstract, and often focused on land and rock forms. His geological art works, the Rock Series, were a gift from Maine Farmland Trust. These paintings and works on paper portray rocks in a painterly and abstract manner and reflect his intimate observations of and connections to nature. IRWIN Collective is a group of Slovenian artists whose works address Slovenia’s colonial history and power struggles. IRWIN’s retro-avant-garde work is represented in a portfolio of that employs and subverts political propaganda posters and iconography. IRWIN is part of NSK (New Slovenian Art). Initially, I had a strong inclination to go with my interest and curiosity of IRWIN, however, I wasn’t able to find much about the symbolism and meaning of their work. And the more I studied the mesmerizing and mystical mandala prints of Bruce Conner, the more I became interested in focusing on them. 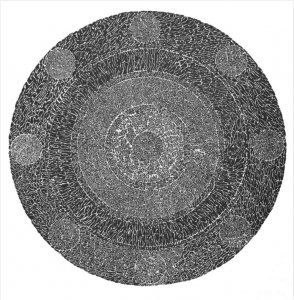 Bruce Conner is an American artist who is internationally recognized in a variety of media, including assemblages, collages, experimental films, drawings, and prints. Conner’s work in other media often directly or abstractly focused on the subject of war and violence. He was also interested in the interplay between psychology and human conscious. In the sixteen lithographs in the Museum’s collection, Conner adopted the religious symbol of the mandala, but eliminated religious details, instead employing it as an abstract symbol of order paradoxically rendered with intricate, maze-like and often chaotic lines and patterns. Conner’s works could be viewed as endeavoring to uncover mysteries, cosmological ideas, and to speak to a deeper level of occult that would resonate with each viewer differently. 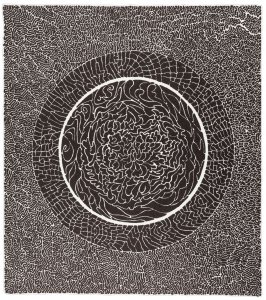 After selecting an artist to focus on, I began on my second phase of the internship, writing an exhibition interpretive introduction panel and labels. The goal was to consider the group of prints as an exhibition, and write texts that would help viewers better understand the works when they were on view. To do this, first I read articles on curating, met with Dan to discuss the readings, curating, and the future Conner exhibition. This gave me insights into integrating text into an exhibition in ways that engage and inform the viewer. Rather than write a separate label for each work, I chose to write about the artist in the intro panel, and selectively write about key works and series, so as to not overwhelm the viewer or exhibition with labels. I tried to stand in the viewer’s shoes, assuming I know nothing about Bruce Conner, and write labels that would help them understand this dense and abstract work. To do this, I viewed the prints in the Synergy Space, the location they will be presented in a future exhibition. I drafted an introductory panel and several smaller labels, met with Dan, and revised them several times. This was an interesting process and reinforced how important writing skills are in the art and museum fields. 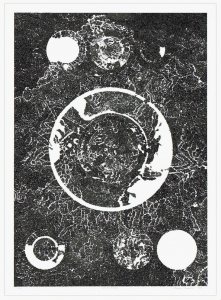 By the end of the semester, I researched and learned about two artists and a collaborative, researched one in greater detail, conceived an exhibition of one, and wrote the texts that will be part of the exhibition. My career goal is to work as part of a design team in the future. While this internship might not seem to be related to this, much of the experiences this semester are related. The internship offered me a chance to learn and apply research, writing, management, and organization skills to a specific project in an art museum environment and with museum staff. I am glad I had the opportunity to intern with an amicable group of faculty and staff, who constantly guided me, had high expectations in me, and inspired me to complete the project as well as I could.