Maika’I Tubbs and A Connection to Place

Upon working on the exhibition, Anthropocenic: Art About the Natural World in the Human Era, I found the topic of place to be quite common in the artists’ interests. Many of the artists emphasize their concern for the environment through a personal, intimate lens. More specifically, they look at the environment through their connection to a specific place. This coincides with the repeated phrase that is so common in environmentalism; “think globally, act locally.” In other words, while these artists certainly examine global environmental issues, they are also highlighting them on a more local and familiar level. 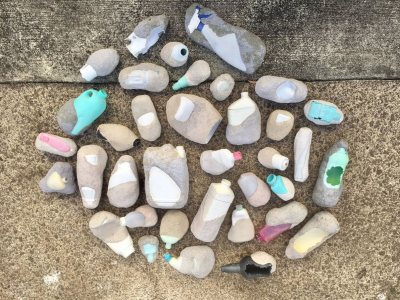 This notion of connection to place was not unheard of for me, as an Environmental Studies major. In my first year at Bates, I took Jane Costlow’s course Lives in Place. This ES class highlighted the crucial connection between people and their place, or land. We even examined how artists in particular draw this important connection. The visual arts are just one of the platforms where human beings can express this deeply rooted connection to a place. Since completing this course, and various others in the ES department, I have come to understand the inherent connection between people and their place as one of the prominent themes in Environmental Studies. While environmental change is certainly a concern than spans all areas of the globe, it is also important to consider how these issues can vary greatly depending on the region. The artists in Anthropocenic acknowledge the different forms of environmental change based on their experience in a certain place.

Maika’I Tubbs is a sculpture and installation artist, originally from Honolulu, Hawai’i. In his piece Stepping Stones, he utilizes found detritus to mimic the shapes and forms of organic materials such as natural stones. His work comments on themes of obsolescence and consumption, while also demonstrating the increasingly blurred boundaries between “organic and artificial life.” His utilization of recycled materials draws an obvious parallel to the specific issue of pollution in island regions such as Hawai’i. But, his juxtaposition of artificial and organic can be seen as even more relevant and specific to the region of Hawai’i. 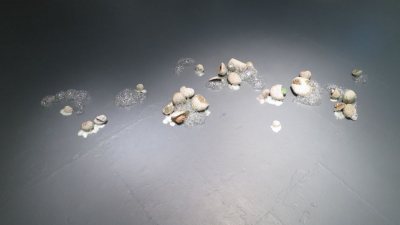 Having grown up in California, I spent much of my vacation time in the near islands of Hawai’i. Over time, I also became fascinated by the current and preexisting history of these islands. One of the most prominent recent issues was the installation of The Thirty Meter Telescope on the Big Island’s dormant volcano Mauna Kea. The volcano is actually the highest in the world, far from light pollution, and in a location of dry-clean air. Scientists became fascinated by the site early on, and thus it is home to the world’s largest astronomical observatory. The light-gathering power of the instruments at this observatory are noticeably strong. Because of this, scientists want even more telescopes, such as the Thirty Meter one, to be added. However, this site is also of crucial importance to Native Hawaiians.

Many Native Hawaiians believe that Mauna Kea is the point of origin of the Hawaiian Islands. The volcano is thus a sacred site for them, and some Native Hawaiians have even been known to bury their umbilical cords there as a way to connect back to this sacred land. Thus, Mauna Kea has become a subject of protest over time. Tubbs’ work juxtaposes artificial with organic, which also parallels Hawai’i’s current conflict of the preservation of native culture and land vs. the implementation of science onto this sacred site. 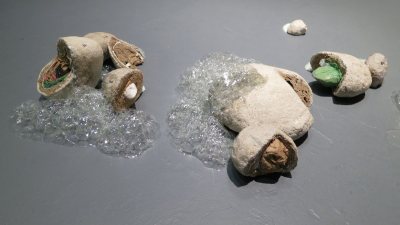 In addition to the controversial protests regarding Mauna Kea, there are also major issues in the Hawaiian Islands around the topic of GMO testing. This environmental concern has always been one of the most fascinating to me. Hawai’i is often regarded as a natural paradise; an area of no problems or concerns. However, underlying this idealistic image are drastic environmental and health concerns. Genetically modified crops are increasingly common in our country’s commercialized agriculture industry. But, not every part of the U.S. allows testing of these crops, given the large amounts of chemicals that have to be released. In other words, new genetically modified species, intended to be pesticide-resistant, have to first be exposed to these chemicals in order to test this resistance.

The climate of Hawai’i lends itself to year-round testing, and the regulations on such testing happen to be more lenient than those on the US mainland.  This, in turn, results in vast chemical pollution on the islands. For example, in Kauai, 18 tons were applied just in 2012. The chemicals that were applied are ones that are banned in Europe for health reasons. This chemical pollution can lead to major health issues, and in Hawai’i specifically has been associated with birth defects. 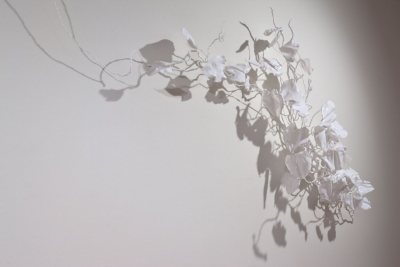 Maika’I Tubbs, A Life of Its Own, 2010
plastic forks, spoons, knives, plates

Hawai’i’s landscape and history clearly demonstrate this juxtaposition of natural paradise and destructive industry. The issues of pesticide testing and Mauna Kea’s land use are specific to the island’s identity. Maika’I Tubbs creates work that comments on environmental issues, but specifically on the patterns that exist in his place of upbringing. Gary Snyder, in his books A Place in Space and Practice of the Wild, comments on our intrinsic connection to nature, arguing that our place is part of what we are. For Tubbs, Hawai’i is not only a part of him, but also his creative work. His sculptures reflect symbolic representations of Hawai’i’s cultural and environmental concerns. 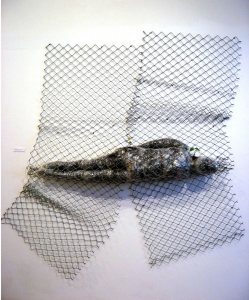 In his piece, A Life of Its Own, Tubbs employs materials such as plastic forks, spoons, knives and plates. These materials, while typically associated with consumption and pollution, in Tubbs’ work, create a beautiful vine of leaves. He juxtaposes the artificial element of plastic with the aesthetic purity of natural forms. In Makua Bound, Tubbs utilizes materials such as soil, packing tape and chain-link to create a figure made of earth-materials laying behind what appears to be a chain-link fence. Again, Tubbs combines elements of artificiality or industry with elements of organic life and purity. This juxtaposition is constantly present in his work, and directly relates to the conflict of ideals that is occurring in Hawai’i today.