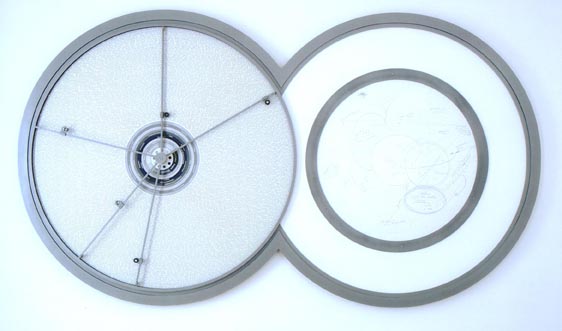 In announcing Keith Tyson’s winning of the Turner Prize in 2002, the Tate Gallery described his art as “a form of experimentation, comparing his studio to a laboratory and his art works to a series of research projects. His investigations culminate in an extraordinary array of objects, machines, drawings and paintings. At the root of his projects is an insatiable curiosity about how things come into being; he says ‘I’m fascinated by science’s dogmatic determinism, the belief that any event or action, however complex, arises from hydrogen atoms bashing together after the Big Bang.'”

The announcement continued: “Keith Tyson was born in Ulverston, Cumbria in 1969. From 1984 to 1993 he attended the Barrow-in-Furness College of Engineering, the Carlisle College of Art, and the University of Brighton. He won the Turner Prize in 2002 for his exhibitions at the Venice Biennale, the South London Gallery, and the Kunsthalle Zurich. These shows demonstrated ‘the playful energy, richness and breadth of content of his graphic works, as well as their relationship to his machine sculptures.'”