Born in Old Town, Maine, in 1921, Bernard Langlais fused his Maine upbringing with influences from the New York avant-garde to create bold abstract wood reliefs. This exhibition, curated by Erin Gilligan ’09, focuses on a select group of Langlais’s representational and geometrical abstractions from the 1950’s and 1960’s and includes an introduction to a broader context influencing him at the time of their creation. Langlais utilized the possibilities of wood as a medium through found objects ranging from toothpicks to driftwood and experimented with both ambiguous and suggestive forms and titles that reveal assemblage, Cubist, and Expressionist approaches to shape and gesture. By doing so, he established an intimate approach to the character of wood, such as its weathering and its manipulation through shaping and accenting.

This approach is contextualized through a comparison with wooden assemblages by Louise Nevelson. Nevelson painted her sculptures in monotone layers, her artwork then becoming not about the character of the wood itself, as seen in Langlais’s art, but rather the transformation of the everyday mundane, such as wooden scraps. Further context is provided by portraits of Langlais by Alex Katz and a painting by Langlais preceding his explorations with wood. These comparisons reveal Langlais’s unparalleled ability to create visual works that are not merely narrated but rather experienced.

By using wood, a three-dimensional medium, to simulate the gestures of painting, his work was not about restricting the practice to sculpture, but expanding the possibilities through bending these restrictions. This exhibition explores how Langlais achieved these possibilities by overcoming the challenges of medium and context, consequently establishing his own conventions of art practice and craft. Analysis of these representational and geometrical abstract reliefs reveals that Langlais’s creative endeavors were neither isolated nor copied from the art world, but that they were part of something greater and that Langlais was both a product and a leader of avant-garde.

Langlais was the oldest of ten children of French Canadian parents. He had no formal artistic training as a child, but found a passion for visual arts through personal experiences. After World War II, in which he served in the Navy, Langlais attended the Corcoran School of Art, in Washington. In 1949, he was offered a scholarship to the Skowhegan School of Painting and Sculpture in Maine and spent three summers there. He also received a scholarship to the Brooklyn Museum School, where he studied under German Expressionist painter Max Beckmann. Langlais moved to Paris in the early 1950’s to study at the Academie de la Grande Chaumiére and, in 1954, received a Fulbright Fellowship to study at Kunstakademie in Norway, where he concentrated on the works of Edvard Munch. Langlais’s experimentations with wood began in 1956 after relying on innovative methods to fix up a summer cottage that he and his wife Helen bought in Cushing, Maine.

Works in the exhibition are shown courtesy of Aucocisco Galleries in Portland, Maine and the Anita Shapolsky Gallery in New York. 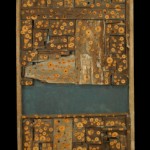 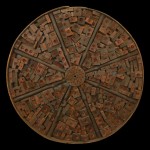 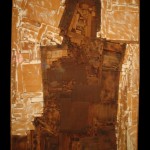 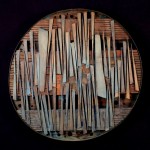