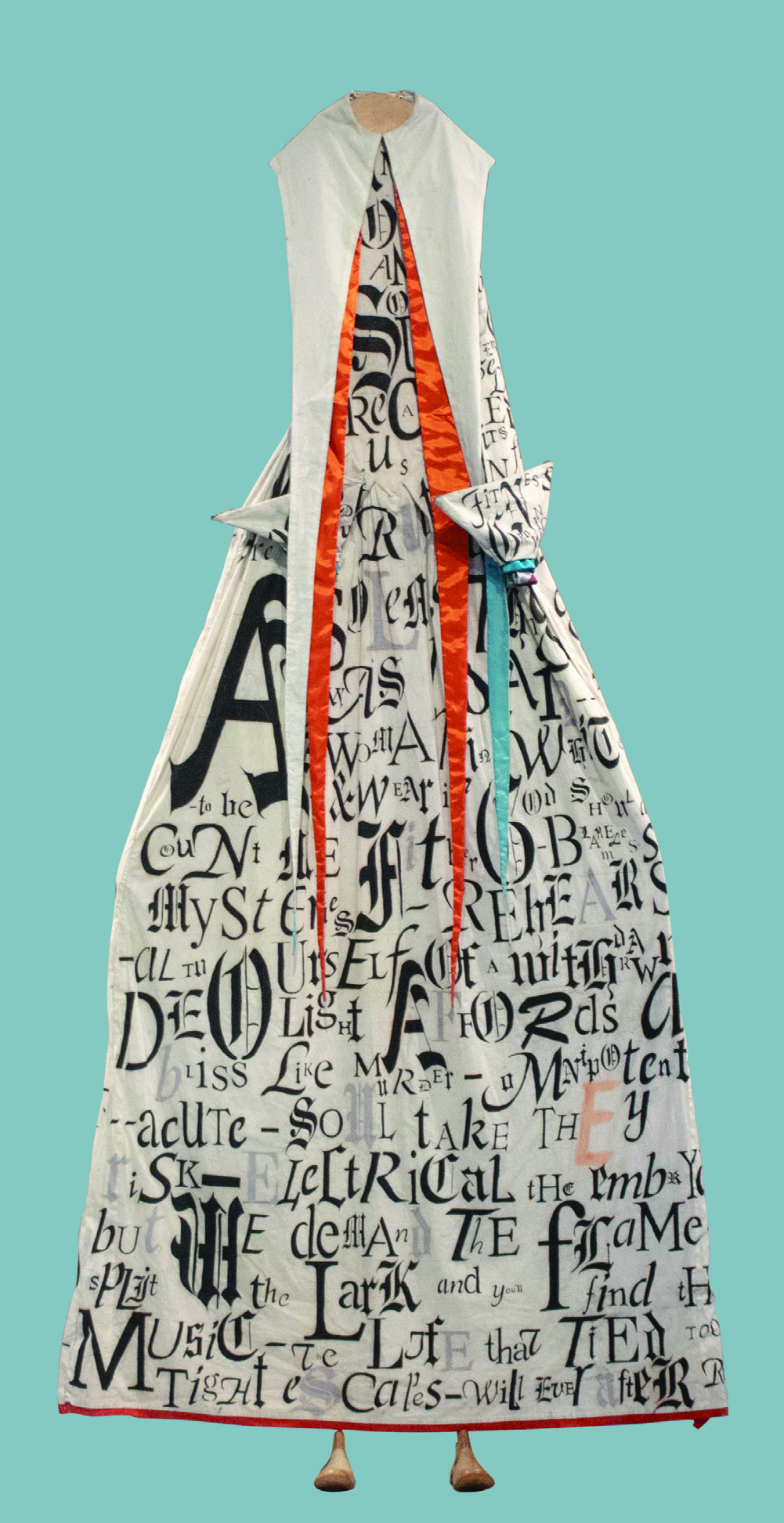 Lesley Dill, Wilderness: Light Sizzles Around Me features a uniquely inspired group of sculptures and two-dimensional works more than a decade in the making. The exhibition represents the ongoing investigation into the voices and personas of the American past by artist Lesley Dill. For Dill, the voices grew from early America’s obsessions with divinity and deviltry, and on fears of the wilderness “out there” and inside us. The extremes of both shaped history and gave pulse and heat to the words of activists such as John Brown, Sojourner Truth, Anne Hutchinson, and Dred Scott. Dill writes: “These personas and their times stir something deep in my own family history and sense of self. I am compelled to explore this period in America’s history when limited access to diversity of written word ignited the bravery of these figures in response to their times.”

Dill’s elongated figures wear the strength of the words of the people they represent, and restoring agency to their lives and experiences. “In her unique way, Dill has created a portrait gallery of effigies—seers, artists, visionaries, and icons—whose emphatic words and creative actions are revivified in her work,” states exhibition curator Andrew Wallace. Dill proposes that there is something untamable, fierce, and persistent in each of their beliefs, which ultimately unites them. She is drawn to this restrictive time period of limited access to a diversity of written word, and the bravery of these figures’ responses. In the exhibition catalogue, Nancy Princenthal writes, “All of Dill’s Wilderness subjects are shown to have had direct contact with some form of transcendent energy. But the urgencies of our time, as social, environmental, and medical crises overlap and compound each other, make the study of history especially urgent.”

In this ambitious body of work, Dill presents a new way of reading and absorbing the words of these figures. The painted and sewn letters in her work are not experienced the same way as more conventional texts, and have a considerable impact on the viewer. Dill found inspiration in the poetry, prose, and declarations of early New England figures and also represents religious crusaders, social activists, and Native American leaders such as Black Hawk, a Sauk warrior; the self-taught artist and Alabama native, Sister Gertrude Morgan; and Mother Ann Lee, the leader of the United Society of Believers in Christ’s Second Appearing, or Shakers. The artist incorporates their words into two and three-dimensional wall hangings and sculptures.

Lesley Dill has roots in Maine. She was born in 1950 to two high school teachers in Bronxville, New York, raised in Falmouth, Maine, and the Adirondacks, and graduated from Waynflete School. She received her Master of Arts from Smith College in 1974, and her Master of Fine Arts from Maryland Institute College of Art in 1980. Dill has had over 100 solo exhibitions and her work is in museum collections worldwide. She is the recipient of numerous grants and awards, including a John Simon Guggenheim fellowship, Joan Mitchell Foundation Grant, National Endowment for the Arts Fellowship, and Anonymous Was A Woman.

Funded in part by the Synergy Fund, Interdisciplinary Exhibitions.

Click below to hear Lesley Dill discuss her subjects.