Squaw Valley, Calif., played host to the 1960 Winter Olympics, an event not lost on the Bates Outing Club, which chose an Olympic theme for the college’s 1958 Winter Carnival.

The four-day blowout kicked off with a parade with floats, bands and marchers (wearing an “unprecedented array of costumes,” according to The Bates Student), all organized into four competing “countries.”

The theme demanded a torch relay.

The theme demanded a torch relay, of course, and a Bates tradition was born when then-Maine Gov. Edmund Muskie ’36 lit a torch that 18 male students relayed from Augusta to campus, arriving in the midst of the opening parade.

Since then, Maine governors (and at least one first lady) have lit the Bates carnival torch most years — some showing more panache than others, judging from this selection of photos from the 1950s to 1980s photos, courtesy of the Muskie Archives and Special Collections Library. 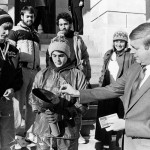 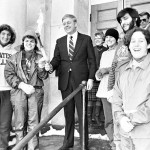 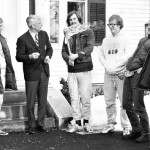 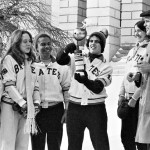 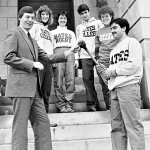 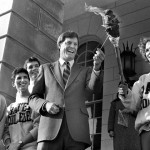 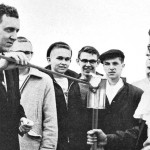 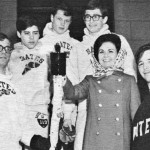 In 1958, the carnival also featured an exhibition by a Swiss Olympic skier swooshing down Mount David, faculty skits, a faculty-student football game, snow sculptures (the winner would be a 15-foot Buddha), tug-of-war, a film, masquerade dance, jazz concert, serenading of the dormitories, crowning of the carnival queen at the “Olympian Twilight” semiformal, and an outing at Camden. Tickets for the weekend? $4.50.