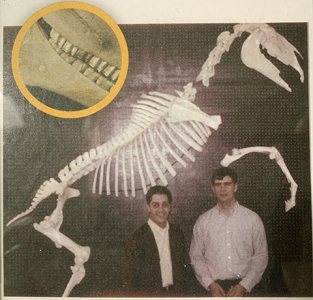 Students Art Ciccione ’69 (left) and Tom Hutchinson ’69. The inset shows a tooth they painted gold to honor their mentor, Prof. Crowley, who had a gold tooth.

Carnegie Science Building’s famed horse half skeleton turned 50 in 2019. Originally assembled and mounted by students Art Ciccione ’69 and Tom Hutchinson ’69 as their junior year project, the skeleton originally graced a pre-1989 renovation introductory biology teaching lab and was mounted in a rearing posture. Following the building upgrades, the lower ceilings no longer accommodated that orientation and so it was mounted on the 5th floor as a galloping horse in a section of wider hallway by the teaching labs. The skeleton is a favorite of visitors, especially school groups, who usually believe it to be a dinosaur. Biology lab staff affectionately refer to the horse as Equisaurus and it is not unusual for the skeleton to adopt holiday garb, particularly around Halloween. While the origin of the skeleton is hazy, Lee Abrhamsen believes it to be from a large working breed such as a Percheron or a Belgian that had been euthanized in Thorncrag and its bones later brought to the anatomy lab collection at Bates. Regardless, we celebrate the work of Ciccione and Hutchinson and look forward to many more years of Equisaurus gracing the walls of Carnegie Science.