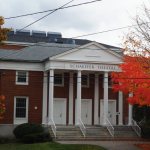 Named for Lavinia Miriam Schaeffer, teacher of speech and the dramatic arts at Bates College for thirty four years, the theatre’s many offerings include major productions from the Department of Theater and Dance, events during the nationally acclaimed Bates Dance Festival, and performances by outside theatrical groups and guest artists.

In addition to the theater itself, the building features a media and technology loaning center, a full set-construction and costume workshops, offices for theater faculty, and the Black Box Theater, home to many student-directed productions during the academic year. Gannett Theater, the third department venue, is located in Pettigrew Hall.