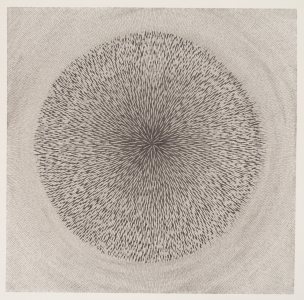 Amy Stacey Curtis is recognized for her ambitious and interactive sculpture installations based on concepts of order, chaos, and repetition. In 1998 she embarked on an eighteen-year project, producing nine “solo-biennials” comprised of eighty-one installation and new-media works. These large-scale installations were mounted in different abandoned mill spaces across the state of Maine, which Curtis cleaned and prepared methodically over each two-year period.To help fund her installations, Curtis produced and sold drawings based on the theme of each biennial (such as Time 2010, Space 2012, and Memory 2016). Over time, she began to investigate drawing as a medium itself, outside the goals or deadlines of her sculpture projects. Though still adhering to the precepts which guide her work, the act of exploring drawing without predetermined themes is, she says, “a meditative process which is both liberating and inspiring.” The remarkable series 27 Hours for example (27 drawings, each completed in one hour, then two hours, and finally over twenty-seven hours) are the result of carefully logged hours of drawing, one hour per day, over the course of 378 days.

Curtis’s installation works typically require visitor participation and, through audience activation, are meant to convey the artist’s conviction that everyone and everything is connected and part of a whole. Curtis’s drawings illustrate her fascination with themes of order, chaos, and repetition, but without the participatory element. No less impressive than her large scale installations, these series of graphic works provide a more intimate and personal approach to her continued examination of interconnectedness.