DJ Spooky’s Rebirth of a Nation 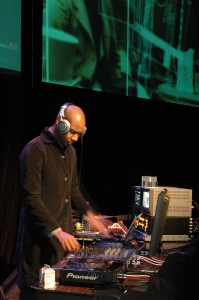 Program Notes by DJ Spooky: With the news dominated by broken treaties, ethnic oppression, raw power grabs and security threats, the time seems just right for revisiting D.W. Griffith’s infamous “Birth of a Nation.” There are so many resonances with contemporary culture’s indefatigable sense of shock and surprise. Turn on the TV, read a newspaper, check any website you feel like visiting, and you’ll see the same resonance. Continuous transformation, constant change. What Griffith did with cinema was create a context of mythic propositions – of a nation occupied by foreign troops, of laws imposed without concern for the local populace, of exploitation and political corruption. All these issues still haunt the world to this day – but in radically different forms. With “Rebirth of a Nation” I invoke a parallel world where Griffith’s film acts as a crucible for a vision of a different America. “Rebirth of a Nation” posits, like Marcel Duchamp and Grand Master Flash, a multiple vision of the record as “found object” – it’s a situation where art and music, multi-media and cinema, act in the same light as the Hispanic American philosopher Santayana’s prescient phrase “those who do not understand the past are doomed to repeat it.” For “Rebirth of a Nation,” cinematic history is the starting point for a critique, not only of history, but how film has come to represent historical events and conditions. “Rebirth of a Nation” asks that the viewer breaks the loops holding the past and present together so that the future can leak through. It says that there is never one way to view history – it asks that we engage multiple perspectives of a horrifying past and presents us with an interrogation of how we think of multi-culturalism in a world that is rapidly becoming Americanized beyond any and all expectations. The past is prologue. The question this film asks, essentially, is “What is American? And how do we live as Americans?” It’s a film piece that posits no answers, only more questions.

*$10 General Public seats available at www.batestickets.com
*A limited number of free tickets are available to Bates students.
For reservations or more information: 207-786-6135 or olinarts@bates.edu