Following its autumn-long appearance on Park Avenue in Manhattan, a 10-foot eponymous Mao jacket was installed on Bates’ own busy thoroughfare, Alumni Walk, on Dec. 5.

Mark Bessire, director of the Bates College Museum of Art, says that he first spied the sculpture in Beijing as he was organizing the museum’s Stairway to Heaven exhibition. He wanted Sui’s piece in that exhibition, but shipping the sculpture from China to Lewiston would’ve busted his budget.

Instead, the jacket initially came to the U.S. as part of Art and China’s Revolution, an exhibition by the Asia Society and the New York City Department of Parks and Recreation.

From Sept. 7 through mid-November, the suit sat on the Park Avenue median at 70th Street.

According to Melissa Chiu, museum director at the Asia Society, “the iconic Mao jacket symbolizes Mao’s legacy and may be viewed as both nostalgic and critical, mirroring the views of the artist and many Chinese of his generation.”

The huge icon of Communist rule looked like some strange bell as it dangled in the air between Lane and Pettengill halls. “Surreal,” said Bessire.

Given the Bates Museum of Art’s reputation for championing contemporary Chinese art (other recent major exhibitions include Documenting China and From Middle Kingdom to Biological Millennium by Wenda Gu), Bessire says he “immediately” approached the Bates Committee on Public Art about bringing Mao Jacket to campus.

From that point, the sculpture’s path to Bates was guided by the College’s Public Art Policy (see page 7 for “temporary installations”).

Bessire hopes the work will “continue the conversation about Chinese history and the expanding influence of China and Chinese culture,” noting that Mao Jacket is an “extraordinary opportunity for Bates to have one of the iconic symbols of Chinese contemporary art by one of the most influential artists in the world today.”

The scuplture arrived early Wednesday morning on a flatbed trailer hauled by a Peterbilt tractor. In two stages, a 120-ton Grove all-terrain crane hoisted the piece from the parking lot behind Lane Hall up to Alumni Walk.

At one point, the huge icon of Communist rule looked like some strange bell as it dangled in the air between Lane and Pettengill halls against the vivid blue sky. “Surreal,” said Bessire.

The sculpture sits outside Pettengill Hall, across from Dana Chemistry.

Afterwards, Bessire relaxed on a bench next to the jacket and talked with people about the sculpture. “I got many responses,” he says. “Some loved it, some were confused and some did not like it. But everybody was certainly thinking about what is public art and what role it has on the Bates campus.”

In the coming weeks, Bessire will offer a lecture about the sculpture and about public art at Bates. 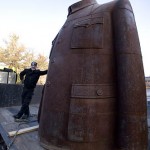 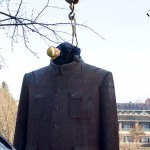 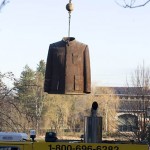 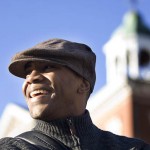 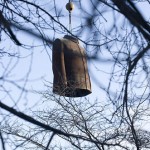 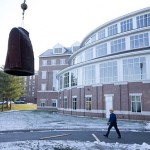 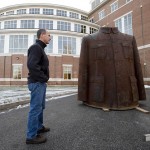 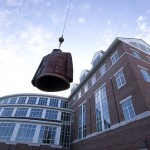 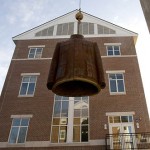 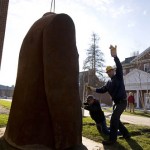 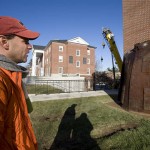 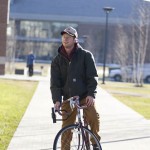 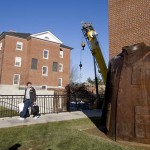 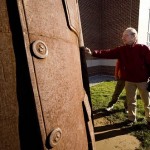 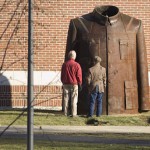