By Kristen Cloutier. Published on September 20, 2019

Lewiston-Auburn has history of benefiting from Bates College research

As officials in Auburn debate whether to use the results of a Bates College land-use survey, the Sun Journal looked at other student research projects that have led to policy decisions in the Twin Cities. 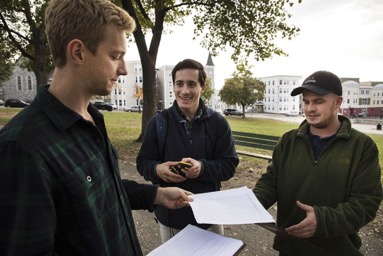 LEWISTON — Painstaking research conducted by faculty and students each year at Bates College — sometimes flying under the radar — often influences decision-making in the Twin Cities.

With more than 50 community-engaged research projects conducted by students each semester, on top of faculty members’ own research, the Sun Journal looked at how recent work by Bates College has been utilized locally.

City staff in Lewiston-Auburn said this week the college research can play an important role. While it often plays out behind the scenes, the results have sparked new initiatives and provided the framework for much larger city projects.

Published on the college’s website are 49 research reports out of the Environmental Studies Department dating back to 2013. Most focus on issues with which elected officials, city staff and local organizations were grappling.

In Lewiston, that has meant research on safe housing and lead poisoning in the downtown, mill redevelopment and urban sprawl. Projects in Auburn have taken on the agricultural zone, Lake Auburn and dam relicensing on the Little Androscoggin River. A project last year alongside city staff looked at the feasibility of establishing a regional transportation authority in Lewiston-Auburn.

A number of the projects are done in direct partnership with city staff and are most often developed in response to an issue or need identified by the community.

Darby Ray, director of the Harward Center for Community Partnerships at Bates College, said the work can play a crucial role for city officials, who often don’t have the funding available to hire consultants to conduct similar studies.

“This kind of student-led research with faculty oversight provides a significant research base and data sets for a wide range of community partners,” she said.

According to Misty Parker, economic development manager in Lewiston, Bates has contributed $35,000 worth of in-kind services during its recent Choice Neighborhood planning process.

While the research is sometimes used and other times shelved without much discussion, Bates’ role in providing information used to help elected officials make decisions was brought to the forefront recently after Auburn Mayor Jason Levesque questioned the intentions behind a Bates land-use survey of the city’s agricultural zone.

Levesque said Auburn “is not a petri dish that Bates College can conduct social experiments in,” and that the survey results would not be used in any decision-making process on the future of the zoning laws, although Auburn City Manager Peter Crichton has said officials should consider the results.

Here are some examples of Bates research that led to recent city projects or decisions.

RESEARCH BEHIND A TRANSFORMATION

In some cases, as in Lewiston this year, research becomes the starting point for a much more ambitious project, like the city’s Choice Neighborhood transformation plan announced in June.

A study completed during the fall 2017 semester, called “An Inventory and Assessment of Street Amenities and Vacant Lots in Downtown Lewiston, Maine: Defining Potential to Create a Healthier Neighborhood,” played a major role in the Choice Neighborhood process, according to those involved.

The 250-page plan, developed with the help of a federal grant, envisions wholesale changes made through new and redeveloped housing, beautification projects and a focus on safety, health and education.

At the centerpiece of the proposal are several ambitious redevelopment projects, including a 66-unit, mixed-use development on Pine Street along Kennedy Park and a 64-unit, family-oriented redevelopment along Pine and Bartlett streets. 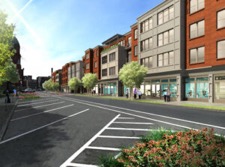 A “transformation” plan for downtown Lewiston and the Tree Streets neighborhood includes a 66-unit, mixed-use development on a stretch of Pine Street. Courtesy image

According to city staff, Bates professors Francis Eanes, who is currently conducting the Auburn land-use survey, and Emily Kane, along with their students, have been central to the work.

Eanes used mapping to understand how people interact with Lewiston’s downtown “Tree Streets” neighborhood. Kane and a student processed data to assess the needs of residents living at Maple Knoll, the public housing project on Maple Street that is a centerpiece of the redevelopment work.

Most recently, the pair has developed metrics that will be used to evaluate the transformation plan’s goals, and Eanes took the lead to develop a survey and community poll on how to spend some $1 million in initial grant funds downtown.

“We have been very fortunate to have Bates as a partner in the Choice Neighborhood work,” Parker said this week. “Their involvement strengthens our work and provides a deeper level of credibility to the plan.”

Referring to the downtown data collection, Ray said much of the work conducted by Bates students is time-consuming.

For Bates students assisting with the Tree Streets study, it was tedious. The group took photos of every rental property in the downtown, entering data points into spreadsheets. They logged the coordinates of all trees, sidewalks, benches and vacant lots with the potential for green space.

The work will also likely benefit Lewiston’s code enforcement office. According to Ray, the research has supported the development of a “Property Health Report,” which will go live Jan. 1. That report is the result of two studies, and will for the first time gather in one place data about the health of the distressed housing in downtown Lewiston.

Ray said the research topics come up mostly organically, with issues sometimes forwarded directly to Bates from an elected official, city staff or a council discussion.

That’s what happened earlier this year in Auburn, when the City Council was debating the merits of the city’s recycling program, which has seen lower rates and higher costs because of shifting markets. Instead of suspending the program, the council formed a recycling committee, which will get help from Bates students.

But, Ray said, before jumping in, college staff convenes stakeholders and must look at resource allocation.

“We do our due diligence to make sure the people who would be the most affected by the work are actually supportive of it,” she said. “We’re always looking for broad-based community interest and support.”

Research by Holly Ewing, a Bates environmental studies professor, and her students at Lake Auburn has been “invaluable,” according to Sid Hazelton, superintendent of the Auburn Water District.

Ewing, who has studied the lake with her students since 2008, has collected over a decade’s worth of data that have helped guide the decision-making of local water officials.

“She’s done some extremely valuable research on the lake,” Hazelton said Thursday. “She’s been studying a number of different things that have really helped us understand the lake better, and also helped educate the public on the importance of watershed protection.”

At the center of those decisions is how to combat increased algae production in the lake. 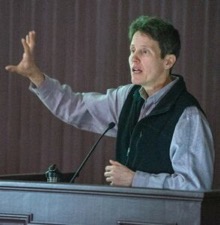 Holly Ewing, professor of environmental studies at Bates College, speaks about the health of Lake Auburn water during a Great Falls Forum at the Lewiston Public Library in March. Sun Journal file photo

Ewing told a Lewiston Public Library audience in March that more nutrients, on which algae thrive, are entering the lake through storm-water runoff carrying fertilizer or fecal matter from animals or leaky septic systems.

Added to those factors, she said, is a warmer climate with more annual precipitation. The more the lake is exposed to the sun, the more time there is for algae to grow. More precipitation means more runoff carrying nutrients.

Hazelton said the college’s work has directly led to watershed management decisions. This summer, an algaecide was applied to the lake, but Ewing’s research has mostly focused on curbing the flow of nutrients entering the water through increased watershed protection efforts.

Doughty said the student, Eli Mihan, compiled water-quality reports and issued a summary in a format “readily digestible to the public at-large.”

Doughty said Mihan also worked to evaluate recommendations from the nine-year-old Lake Auburn Watershed Management Plan, to study which recommendations have been completed, should continue or may no longer be viable.

MUSEUM IN THE STREETS

Bates projects can also lead to smaller, more visible projects, like a walking history trail installation that was a collaboration among the college, local organizations and staff from both cities.

According to David Hediger, director of planning and code enforcement in Lewiston, students provided the narratives and collected historic photos for the upcoming installation, which will place a series of historical markers in the cities.

Work on the markers is underway now by The Museum in the Streets, a Maine-based company that has designed similar history trails in the U.S. and abroad. At least 10 other Maine cities have markers installed in downtown areas.

Hediger said he’s also worked with Bates students on research on urban sprawl and a 2015 parking survey. He said many of the recommendations have since been implemented.

“These have all been positive experiences, especially when there is oversight and direction provided by the professor,” he said this week. “The reports and information provided have been thorough, complete and well-vetted, taking into consideration different options and perspectives. I welcome their interest and efforts.”

Other projects that have had a recent impact, especially in Auburn, included research into the recreation potential of the Little Androscoggin River through the relicensing of the Lower Barker Dam, and a study released just this year on land-use changes and zoning alternatives in Auburn’s Agriculture and Resource Protection zone.

Eric Cousens, deputy director of economic and community development in Auburn, who took the staff lead on the relicensing report, did not return calls last week seeking comment for this story.

Another recent project, studying the feasibility of creating a regional transportation authority in Lewiston-Auburn, has been disseminated to local officials but not discussed in depth by elected bodies.

For a list of published community-engaged research reports produced by Bates College students, go to https://tinyurl.com/y3k7sgc3.