The scene of the greatest economic and cultural metamorphosis of our time, China is not only at the center of the world’s attention but has arguably the most vital, imaginative, and uncontainable art scene in the world.The Rising Tide investigates China’s meteoric march toward the future through the work of some of its most talented emerging artists, whose work reflects the country’s rising influence as an economic, political and cultural force in the global arena.

In recent years, Chinese artists, especially those working in photography and video, have gained international recognition for their powerful works capturing the social and aesthetic confusion created in a rapidly changing society. To the Chinese avant-garde, materialism is all pervasive, and the dominant consumer culture has altered people’s mentalities. Interestingly, their work, influenced by Western ideals and art practice, remains distinctly Chinese in its content and aesthetic.

Produced within the dual context of globalization and urbanization, the work of artists Cao Fei, Xu Zhen, Yang Yong, Wang Qingsong, Chen Qiulin, Birdhead, and Zhang O examines the collision between the present and the future, and the confusion and ambiguity that characterize the new China. Their work is often a stunned attempt to deal with the dynamic and tectonic forces transforming China. The Rising Tide captures this momentous time in China’s history while exploring the work of artists, who comment with intelligence, wit, foreboding and nostalgia. 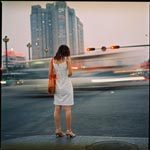