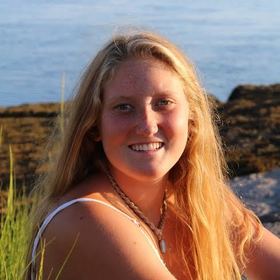 Katrina Johnson ’21 has achieved a rare undergraduate milestone with the publication of a first-author research paper in the peer-reviewed journal, Ecosphere, based on her research internship in summer 2019 with NOAA. Titled “Extracting ecological metrics from archaeological surveys of shipwrecks using submersible video and laser-line scanning”, the study assessed the feasibility of obtaining ecological information about the marine community that develops on shipwrecks  utilizing human occupied submersibles while simultaneously conducting archaeological surveys. Johnson et al. compared wrecks of a German U-boat and a Nicaraguan freighter, which had sunk in close proximity to one another off the coast of North Carolina during WWII, for a variety of ecological parameters to compare and contrast the two communities. Says Johnson, “My role was a researcher at the Duke University Marine Lab in affiliation with NOAA. My job was to take the raw data, configure it, analyze it, and write up the paper. I was not a part of the field work that went into the paper I wrote. That data was collected in 2016 during a joint archaeological and biological mission of NOAA’s boat the R/V Baseline Explorer. I assisted in other field projects while I was at Duke including deploying satellite trackers on deep sea shipwrecks to monitor tagged sand tiger shark locations and movements.” A press release from the Ecological Society of America includes images of the mission and wrecks.

As of this posting, Katrina has a second paper about to be published from the same project on which she is a co-author. Getting authorship on two papers from a summer internship is a testament to Katrina’s achievements. Congratulations Katrina!