Next Reunion in 2008. Got news? Tap out a note to magazine@bates.edu! Muriel Brooks is in her seventh year as a volunteer math teacher at a small Catholic school in Still River village in Harvard, Mass. One of her 11 Algebra I students is her granddaughter, Becky, which Muriel finds quite exciting. Becky is the oldest of five so there are four others to look forward to. This summer she joined Jayne Nangle Peterson, Sally Morris Thwing, and Pat Carmichael Waugh for their second one-day reunion…. Alan Kaplan lamented the end of summer and his inevitable return to work for the Army Disability Agency. Over the summer, he and Nancy drove to Tucson to visit their oldest daughter and her significant other, and then to Tampa to visit with Alan’s mother and brother and his new bride…. Since retirement from American River College in Sacramento, Tom King has published a memoir, By Blessings Bewildered, and a novel, The Great Matrimonial Debate, set at Bates. He continues as editor of Undercurrents, the faculty literary review he founded at American River…. Toni Lovejoy realized a lifelong dream when he published a scholarly article, “Racism in AnteBellum Vermont,” in the Vermont History Journal (Winter 2001). He’s at work on The Black Snake, about an 1808 murder trial in Burlington, Vt., that resulted in the earliest capital trial in which a hanging took place…. Jim Wheeler writes, “Sold the sailboat, bought a pontoon boat. Living on the Great Sacandaga Lake in New York. Will head to Florida again this February. Coaching track at local high school.”

Lori Beer wore a T-shirt reading “Older than you and I don’t train” on an eight-hour, 100-mile bike ride in Salisbury, Md. Lori and his new wife, Lyn Wexler, also wore T-shirts at their recent wedding, reading “Try it until you get it right.” When not wearing T-shirts, they ski at Vail and on the East Coast…. Joyce Conant Lovejoy retired from pastoral ministry last December. She still serves as chair of the N.H. Conference United Church of Christ Commission on Congregational Life and preaches in neighboring churches during holidays and vacations…. In February 2002, Cynthia Horton Cooke and Ron spent three rainy weeks in New Zealand. The trails inspired Cynthia to begin training for their hiking trips. They spent seven days hiking in Yosemite high country with a guide and then 10 days hiking England coast to coast…. Despite retirement, Norman Jason and Linda work for Marvelwood School about 50 days a year, doing admissions travel throughout New England and the Eastern Seaboard…. Dick Jasper and Manolie “still have all the same irons in the fire (health store, restaurant, yoga-meditation classes,” he says. He plans to come east for Reunion and visit with sister Mary Jasper Cate ’63, niece Julie Cate Wisniewski ’95, and nephew David Wisniewski ’93…. Joan Kennard Michel skis with Waterville Valley’s “Silver Streaks” and rides snowmobiles when conditions permit. In April 2001 she traveled to Holland and Belgium…. Jim Kyed retired as manager of the New England EPA Superfunds Records Center in Boston. He continues on the public library board of trustees and the conservation commission in Truro, Mass…. Mary Lawlor Dionne volunteers as a guardian ad litem, which keeps her in touch with child welfare issues and former colleagues. Her husband, Peter, continues to teach at UMaine-Augusta…. Ted Lindquist lost his son Kurt in November 2001 when he suffered a massive coronary while jogging. Kurt was born in Lewiston after Ted and Audrey returned to Bates following two years in the Army…. Philip D. Main was re-elected judge of probate in Granby, Conn., and continues an active law practice. Recent cataract surgery restored his vision to 20/20…. Sheldon Sullaway is cancer-free following chemotherapy to treat non-Hodgkin’s lymphoma. “Saint Marilyn (my wife) took great care of me,” he says. He plans to return to teaching part time at Tufts Dental School…. Sheila Tulk Payne enjoys not being in charge after 30 years managing the lunchroom at the Woods Hole Oceanographic Institution. She now assists in an arts workshop for 4-year-olds…. Nancy Wickens Taylor works as quality improvement coordinator for a small home health agency only five minutes from her home. She started out at a day or two a week, but is now almost full time due to the increasing patient census…. Bruce Young and Hattie are happily settled as a newly married couple. They thoroughly enjoy coastal living in North Carolina with a golf course in their backyard. In January, he taught a master’s level course, “Ethics and Morals for Business,” for Webster Univ. at Camp Lejeune. 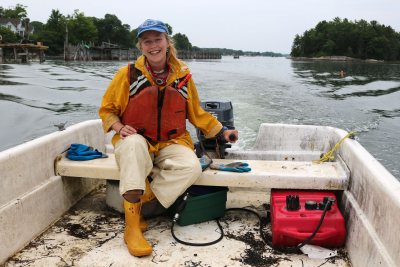