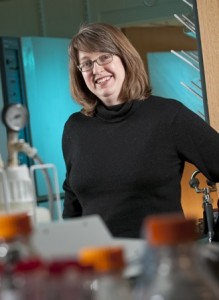 Saranac Lake, N.Y. — New research from the laboratory of Dr. Elizabeth Leadbetter at the Trudeau Institute may lead to a whole new class of vaccines. Dr. Leadbetter’s lab has discovered new properties of a potential vaccine adjuvant that suggest it could be useful for enhancing protection against a number of different infections. This new data will be published in the January 2012 issue of the journal Nature Immunology (Vol. 13, pp. 44-50). The paper, “iNKT cells direct B cell responses to cognate lipid antigen in an interleukin 21-dependent manner,” is now available through Advance Online Publication (AOP) on Nature Immunology’s website at http://www.nature.com/ni/journal/vaop/ncurrent/full/ni.2172.html.

About the new findings

Most human vaccines contain adjuvants — substances added to the vaccine to improve immune response to the antigens. Adjuvants increase the strength of the immune response and also allow for smaller amounts of antigens to be used in vaccine production.

Immune response to antigens results in the production of antibodies, which are a secreted product of B cells. Antibodies attach to antigens and help our bodies eliminate harmful microbes. Some T cells can help B cells make antibodies. Dr. Leadbetter previously discovered that natural killer T (NKT) cells, a special population of T cells, can help B cells make antibodies. NKT cells are special because they recognize lipid (fat) antigens. In contrast, most helper T cells recognize protein antigens. Because many harmful microbes produce unique lipids, Dr. Leadbetter hypothesized that directing NKT cells to help B cells could provide a new way to induce antibodies against harmful microbes, which would complement existing vaccine technologies.

Dr. Leadbetter’s new studies advance her hypothesis that lipid molecules may serve as promising vaccine components. The studies demonstrate that NKT cells can help B cells produce antibodies that recognize lipids, but this does not result in long-lived memory immune responses to the lipid antigens. Second, the studies demonstrate that the lipids, when used as adjuvants to enhance immune responses to more conventional protein antigens, induce memory immune responses against the protein target without inducing a memory response to the lipid itself. Together, these findings suggest a single lipid adjuvant could be used multiple times without losing its effect. The new research also characterizes how NKT cells help B cells produce antibodies when lipids are used as a vaccine adjuvant.

Lipids may become an important new class of adjuvants not only because of their intrinsic properties but also because of their capacity to activate NKT cells. According to Dr. Leadbetter, “These cells are really fascinating because they have both innate and adaptive immune cell properties. In other words, they act rapidly, but also specifically. NKT cell activation by certain lipids enhances the activation of other immune cells, thus acting as the body’s natural adjuvant.”

Dr. Leadbetter earned a B.S. with highest honors from Bates College (Lewiston, Maine) in 1993 and worked for ImmuLogic Pharmaceutical Corporation (Waltham, Mass.) before receiving her Ph.D. in microbiology/immunology from Boston University School of Medicine in 2002. She was a postdoctoral fellow and then an instructor in the Division of Rheumatology with Dr. Michael B. Brenner at Brigham and Women’s Hospital/Harvard Medical School until 2009, when she joined the Trudeau Institute as an Assistant Member of the faculty.

About the Trudeau Institute

The Trudeau Institute is an independent, not-for-profit, biomedical research organization, whose scientific mission is to make breakthrough discoveries leading to improved human health. Trudeau researchers are identifying the basic mechanisms used by the immune system to combat viruses like influenza, mycobacteria, such as tuberculosis, parasites and cancer, so that better vaccines and therapies can be developed for fighting deadly disease. The research is supported by government grants and philanthropic contributions.