Get to Know Your Bates Trees 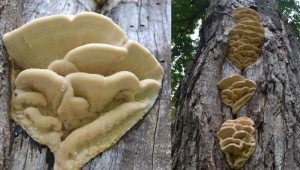 This is not so much about sugar maple as it is about the amazing fungus on it.  In the middle of the Quad is a large sugar maple with a Northern Tooth Fungus (Climacodon septentrionale).  This fungus is parasitic and is predominantly found on maple trees, where it can compromise the mechanical strength of the trunk by causing heartrot.  The latin name of the fungus describes a lot…climac (G) A ladder; odon (G) A tooth; septentrion (L) Northern.  So there you have it, the Northern Tooth Fungus, which is shaped like a ladder. Devanshi Trivedi ’22 of Rajkot, India, has wanted to study the brain ever since third grade, when a friend told her that our eyes see... The prestigious journal Nature has published research by Lundblad, a professor of physics, and his coauthors on their history-making research aboard the International Space Station. Aided by seniors keen on making the campus look great for their graduation, the Bates grounds crew plants annuals here and there, including an iconic Commencement location.