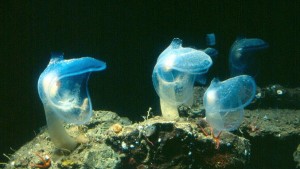 The “ghostfish” is not actually a fish at all, but rather a sea squirt or tunicate. Tunicates are primitive chordates, so they are even more closely related to humans than other intelligent animals like squid. Most sea squirts live attached to the seafloor and feed on microscopic phytoplankton and bacteria that they filter out of seawater (by pumping though a ‘net’ in their bodies). However, the “ghostfish” sea squirt is actually predatory, has a large mouth like a Venus fly trap, and uses it just like that famous predatory plant. When small animals like shrimp or amphipods swim into its mouth, the mouth slams shut and stays shut until the meal is digested. These unique deep sea creatures live on the walls of rocky underwater canyons like the Monterey Canyon off the coast of California.