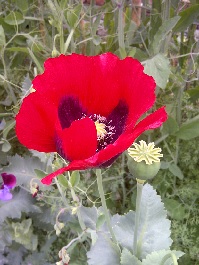 The red poppy is attributed to growing wildly in Europe, specifically southern Europe, but originally cropped up in Eurasia and North Africa. A quickly growing plant with the attributes of a weed, the red poppy or corn poppy grew noticeably during World War One in the “no man’s land” spaces between the trenches, and was thus adopted as a symbol of the war, worn in remembrance of lives lost. In both Persian and Urdu art the flower symbolizes love. The red poppy has an unpleasant smell and is mildly poisonous to animals, but maintains a striking beauty in its deep red coloration and long stem.