Get to Know Your Bates Trees

American elm was once prized for planting along city streets and on college campuses due to its majestic vaselike crown. During the 20th century, this tree species suffered tremendous decline due to Dutch Elms Disease (DED). Caused by closely related species of fungi (Ophiostoma sp.) transferred from tree to tree by bark beetles (Hylurgopinus rufipes Eich. and Scolytus multistriatus Marsh.), this systemic disease quickly induces wilting of leaves and dieback of branches and roots, ultimately causing mortality of the tree. Along city streets with closely planted elms, DED can move quickly from tree to tree via grafted roots.

Although the American elm is best known for its demise to DED, the tree has many uses. The wood is fairly hard and stiff with interlocking grain, which is perfect for use as hockey sticks. Further uses included furniture making, construction, and veneer for boxes, crates, and baskets. 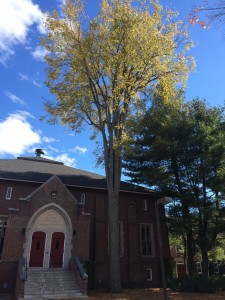 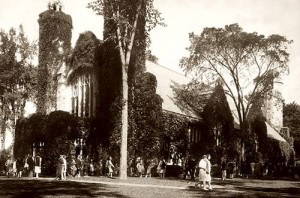 Then: (October) Elm trees, most lost to disease over the years, create a visual harmony with the ivy-covered Chapel in this view of the busy Quad. Undated photograph by Kahill Photo Studios, gelatin silver print, the Edmund S. Muskie Archives and Special Collections Library. (text and photo from https://www.bates.edu/150-years/sesquicentennial-slideshow/)