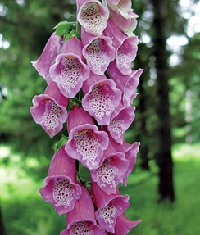 Geographic Range: The foxglove is found in a very wide geographic range. The plant is indigenous to Europe and Northwest Africa but has been naturalized in many other parts of the world from North America to New Zealand because of its popularity as a garden plant. The plant does best in partial shade and moist soil.

Cool Facts: The foxglove got its name because the shape of the flower looks similar to both a gloved finger and a fox’s white paws. Additionally, the foxglove was originally used as a remedy for heart disease because the dried leaves were able to contract heart muscles and slow down a heartbeat. Lastly, this plant is poisonous if eaten! 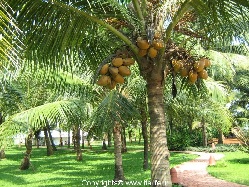 The Coconut Tree is found in tropic ecosystems. Coconut Trees thrive in humid temperatures, and prefer sandy soils. Coconut trees in America can only be found in Hawaii and Florida. They can also be found in Australia, Sri Lanka, Bermuda, Oman, Dhofar, and other tropical climates. Coconuts are the part of the daily diets in the locations they are native in and the fruit itself contains quantities of water different then other fruit. Coconuts not only serve as a food source in the areas where the trees are native, but coconuts also serve a religious purpose in some cultures.