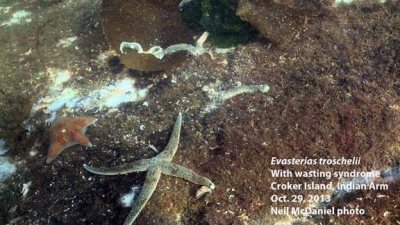 Marine viruses play a huge role in regulating phytoplankton blooms and recycling nutrients in the ocean, but it is far less common for them to cause dramatic shifts in rocky intertidal habitats. Over the past few years, sea star wasting disease has been devastating sea star populations on the west coast of North America, from Alaska down to southern California. This disease causes sea stars to lose arms and basically appear to be melting (insert Wizard of Oz joke here), and it has dramatically reduced sea star populations. Areas that once had thousands of sea stars now have only a few. Until now, the cause of sea star wasting disease has been a mystery; on November 17, researchers at Cornell University published a paper (Heweson et al, 2014) showing that the cause of sea star wasting disease was a virus, now named Sea Star Associated Densovirus (SSaDV). This is not the end of the mystery though, because this virus has been present in sea star populations since the 1940s—so why is it such a problem now? There are multiple hypotheses, including that the virus mutated to a more harmful form, that warmer and more acidic seawater due to climate change makes sea stars especially vulnerable, or that sea star populations got so high that the disease could be easily transmitted. After this massive die-off, the question will be: is this a natural cycle from which sea stars will recover, or is this sea star-free world the new norm on the west coast?