This article begins by discussing the history of global warming, and the rise of the surface temperature of the Earth.  It discusses the energy imbalance between solar radiation coming into the Earth, and that which radiates from the surface and is trapped by greenhouse gases.  The Earth receives roughly 341 W m2 of solar radiation over an annual average, and ~102 W

What happens to solar energy when it reaches the earth? From Seinfeld 2011.

The ice sheets that reside on the two poles are more susceptible and sensitive to global warming and climate change than the rest of the globe. In this case, the West Antarctic ice sheet on the West Antarctic Peninsula (WAP) is being studied for changes in sea ice presence, upper water column temperatures, and primary productivity over the last 9000 years. Studies of this nature are more important than ever due to the urgency that global warming and climate change presents. The ways that changes in certain variables over geologic time have affected sea ice conditions in the past are especially crucial to understanding how they may be affected in the modern time period. The aforementioned variables were examined by studying an sediment core that was taken from the Palmer Deep Basin by using a multi-proxy approach: biomarkers (highly branched isoprenoid alkenes) for sea ice presence, TEXL86 for temperature, and micropaleontological data through the use of diatoms. The use of diatoms were especially interesting in this study.  Certain species of diatoms, which are microscopic phytoplankton in the greater group of algae, only exist in certain sea conditions.  So when the seasons change, or ice conditions change, different diatoms will be present in the area. 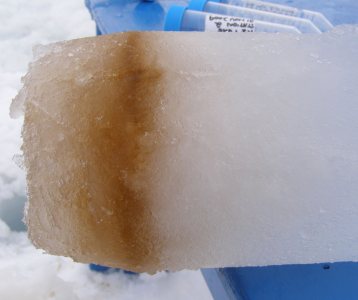 Diatoms growing on the bottom of sea ice in the Arctic. from http://blogs.jcvi.org/

When diatoms die, their cell walls, or tests, are preserved on the sea floor.  Thus, when a sediment core is taken from the sea floor, layers of different speices of diatoms can be found. For example, when the sea ice is plenty, and there is a lot of productivity with cooler water temperatures, a certain

species of diatom will flourish.  When the seasons change and ice melts to have a more open ocean, a different kind of diatom will exist. These annual layers of melt and refreeze in ice can be determined through the study of species in the sediment cores.  Through this proxy and two others, this study was able to construct a temperature and sea ice history for the Palmer Basin throughout the Holocene. The Holocene, the most recent geological epoch, is characterized by an overall cooling trend, and increasing sea ice presence, though there are varying trends of both variables in the early, mid, and late-Holocene. The early Holocene was warmer than the other two periods, and was categorized by a lengthier ice-free season, with warm upper ocean temperatures that were caused by high winter and spring insolation, warmer air temperatures, and upwelling of warm water. The mid-Holocene is characterized by a cooling trend which caused longer seasonal ice presence which resulted in a maximum in regional productivity.  The Late Holocene was characterized by an even longer ice season, but warmer surface temperatures in the summer.