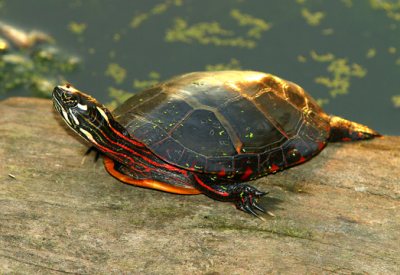 Frederic Janzen writes Climate change and temperature-dependent sex determination in reptiles with the goal of using painted turtles (Chrysemys picta) as a model for the drastic effect climate change could have on different species. Temperature increase is projected to be 0.6 to 8 degrees Celsius within the next 100 years, which will drive extinction or relocation of many species with a specific temperature range. Janzen observed nests of painted turtles for five summers and gathered temperature data during the time of gestation of the turtles. He then tested the significance of the mean monthly temperatures on the resulting sex ratio of the turtles. He found a strong correlation between the second third of the gestational period (July), temperature, and sex ratio. The conclusion was that as July temperatures increased from the mean, the stronger the preference towards female offspring. Using models resulting from his study Janzen concluded that an increase in mean July temperatures of only 4 degrees Celsius would result in a 100% female offspring population resulting in extinction. Janzen notes that evolution cannot act in such a short time scale and also that relocation is especially difficult for reptilian species. The limitations of this study include the link between temperature and when the turtles reproduce, Janzen proposing that hotter temperatures could result in the turtles laying their eggs earlier in the season. Also, little is known about many other temperature-dependent sex determining species so it is unclear if these specific findings can be applied across all species. Nonetheless, global climate change is going to have a drastic effect on many species who are intolerant to variation in temperature.

Biologists Philip L. Munday, Mark I. McCormick, and Goran E. Nilsson also studied the impacts of global warming and climate change on individual, temperature-intolerant species, particularly two coral reef inhabitants: damselfishes and cardinalfishes in their case study, Impact of global warming and CO₂ levels on coral reef fishes: what hope for the future?  This study models the potential impacts of rising global temperatures and carbon dioxide levels in the ocean on individual fishes, populations of fishes, and potentially entire ecosystems.  By creating mesocosms and altering the temperatures and carbon dioxide content and 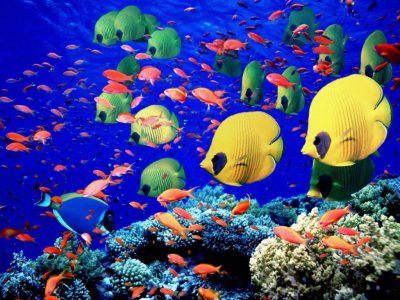 examining the changes or lack thereof of the different fishes, Munday et. al. observed that the behavioral changes of fishes as well as affected mortality rates.  Results include decreased aerobic scope, hypoxia tolerance (which led to increased mortality in both species), swimming speed, and reproductive performance.  Munday et. al. concluded that due to cardinalfishes’ and damselfishes’ extremely small thermal tolerance range, these two species are being greatly affected in their natural habitats by global warming.  They also inferred that other tropical species with relatively narrow thermal ranges would experience similar issues as global temperatures and carbon dioxide levels increase, affecting entire ecosystems, first in the tropics, and then in higher latitudes.