Increasing Flood Risk and Wetland Loss due to Global Sea-level Rise: Regional and Global Analyses is a study using various models to predict the future impacts of sea level rise on flood risk caused specifically by storm surges, and the impending loss of our wetland environments. A large number, 21%, of the world’s population lives within 30 km of the coast, with this number increasing constantly because of the world’s rapid population growth. This means that sea level rise is a very relevant issue, not only because of the direct impact flooding will have on our human population, but because of the indirect effect loss of wetland ecosystems will also have on us. Wetlands provide not only a source of food but flood protection, meaning that the destruction of these environments will not only increase flood risk along with sea level rise, but also have other impending negative impacts on our growing population. This study includes the factors of population growth and an increase in standard of flood protection (keeping region income in mind), but assumes all other climate factors to be constant, meaning that this study could be an underestimation of the entire phenomenon that is global warming, with sea level rise being one result. Once again this study does not use collected data, but data generated from models used to determine future implication of sea level rise on both flood risk and wetland loss. 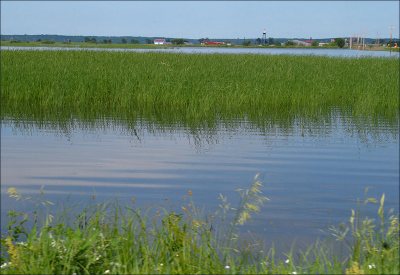 Rising sea level could threaten wetlands, especially in areas where human development has created artificial boundaries around the margins of the wetland. Photo from wunderground.com.

According to this study, sea level will rise at least 37 cm by 2080. This amount of sea level rise will force more and more people to respond in some way. Highly populated delta areas, such as in South Asia, will be at the highest risk of flood disaster. Equatorial regions, such as the Mediterranean, will experience the highest loss of wetlands. As sea level rises, there will be loss of human life, loss of property, and loss of important ecosystems (like the wetlands). In order to protect coastal populations, several measures must be taken, as suggested by the article. Planned retreat involves building cities further inland while accommodation would mean building new structures to be flood-resistant. To protect existing structures, barriers, such as dikes and walls, can be built. Wetlands can be maintained by adding sediments to facilitate migration and creating spaces for migration during planned retreat. The article also highlights the importance of mitigation policies which would decrease the amount of greenhouse gases emitted into the environment and by doing so slow global warming and sea level rise in the long-term. Without measures to slow and counteract sea level rise, many more people will be put in danger each year.