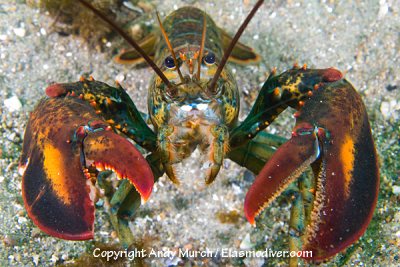 Larvae of American Lobsters will be negatively impacted by ocean acidification

In an article by Elise Keppel, Ricardo Scrosati, and Simon Courtenay, “Ocean Acidification Decreases Growth and Development in American Lobster (Homarus americanus) Larvae”, the researchers examined the effects of decreased pH, caused by an increase in atmospheric CO2, on New England lobster larvae. The ocean currently has an approximate pH of 8.1, and is projected to decline to pH 7.7 in the year 2100. The researchers exposed lobster larvae to ocean water of pH 8.1 or pH 7.7 and measured their carapace length (mm) and time to molt (days). The experiment concluded when the larvae left their pelagic stage and entered into their benthic stage (after 3 molts). The researchers found that larvae in more acidic water took longer to molt and were smaller overall smaller. The researchers speculated that the larvae in the more acidified treatment could be growing less and molting later because they are spending more energy regulating their internal pH instead. This result could prove to be problematic for lobsters as the ocean becomes more acidic. Since the larvae took more days to molt, they would be in the water column for longer. This means that the larvae are exposed to predators for a longer period of time. Without being able to seek shelter, the larvae population could decline because of predation and lead to lower adult lobster populations. 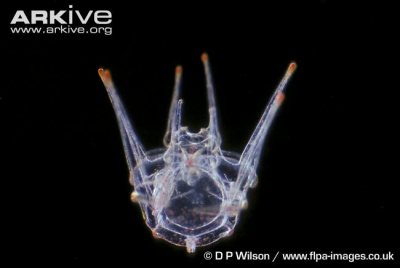 Sea urchin pluteus larvae bud more often under acidified conditions, but it is unclear what benefit this has.

This article discussed larval purple urchin (Strongylocentrotus purpuratus) budding, and how budding is affected by ocean acidification. They collected adult purple urchins from San Diego Bay, CA, and induced them to breed by injecting KCL into the coelomic cavity. They then raised the larvae under three different levels of pCO2: 300 micro-atmospheres, which is what the ocean was at in 1990, 700 micro-atmospheres, which is the projected ocean acidification for the year 2100, and 3000 micro-atmospheres, which is the projected ocean acidification for 2300. They found a positive correlation between budding and increased ocean acidification. These buds were less viable however, due to their smaller than usual size. While one advantage to being small is less predation, the disadvantages outweigh the advantages. Being small decreases their ability to move in moving water, thus limiting their ability to anchor and grow and calcify to adult form. Smaller size also affects their feeding and lowers the amount of water and food they can process at one time, thus suppressing and delaying growth and prolonging the time in which they stay in the more vulnerable larvae stage. Overall they concluded that these buds were not viable and that ocean acidification was negatively impacting the purple urchin species.