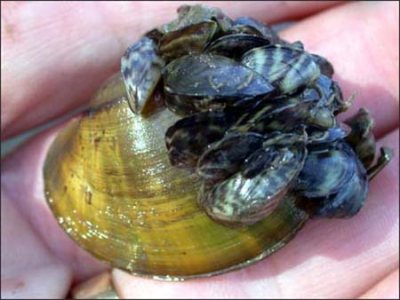 In our study of invasive species and the effect they can have on marine ecosystems and human life, Matt DiVite and I focused on two specific organisms that have posed major threats in recent times, finding primary literature pertaining to those organisms in order to give us context for their destructiveness. One of the studies that we found was entitled: “The impending extinction of North American Freshwater Mussels (Unionoida) following the Zebra Mussel (Dreissena polymorpha) Invasion” by Anthony Ricciardi, Richard J Neves,  and Joseph B. Rasmussin. This paper delved into the issues that the zebra mussels, a species native to Eastern Europe, will cause for freshwater mussels in north america in the coming years. The zebra mussels, which invade local freshwater and brackish water ecosystems, are a fouling organism. This means they latch on to anything and everything, almost completely covering any exposed surface in bodies of water. Zebra mussels that foul onto other species of mussel inhibit their ability to filter food out of the water. The extinction rates of freshwater mussels, due to pollution and other human-caused damage is already quite high across the continent, sitting at about 1.2% extinction of Unionids per decade. The paper found, however, that the inclusion of zebra mussel effects multiplies the extinction rate by ten, meaning that 12% of the Unionids in the U.S. will die off per decade. Given the heavy involvement of Unionids on shellfish industries in places such as the Mississippi River, and the pearl industry, a loss of this magnitude will have a huge effect on our economy, if the extinction rates follow the models created by Ricciardi et al. 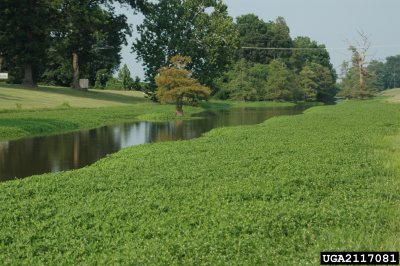 Alligatorweed lining a small stream, where it outcompetes native species. Photo from invasive.org.

Since Ryan had focused on an invasive animal I wanted to focus on an invasive plants. The species I focused on was Alternanthera philoxeroides or “Alligatorweed”. Originally from South America, alligatorweed came the US in 1890 and is now extremely common in the southeastern part of the US.  This aquatic and terrestrial plant forms thick mats, which cause many problems for the native species. Some of these problems include decreased light availability and decrease oxygenation of water. Alligatorweed also has a great human impact because it can often exacerbate flooding after heavy rainfall by block water drainage in canals and streams. The primary literature I looked at for this species of plant was  “Matrix analysis to model the invasion of alligatorweed (Alternanthera philoxeroides) on Kentucky lakes” by Samantha Erwin, Aron Huckaba, Kate S. He, and Maeve McCarthy. This paper disgusted an experiment that took place at Murray State University in which the growth rate and sensibility of alligatorweed was tested. The overall goal of the experiment was to study the invasive dynamics of alligatorweed and to provide helpful insight for development of management plans. The experiment last about 2 and a half months and during this time six different treatments groups of alligatorweed were tested. These treatment groups included both terrestrial and aquatic environment.  Once all the appropriate measurements were obtained matricidal analysis was performed. The results of the experiment showed that there was not a significant difference in the growth rates in each of the six treatments. However, analysis did show that terrestrial plants were most sensitive to change at a late life cycle stages and that aquatic plants were most sensitive to change at early life cycle stages. Although no specific control plans were discussed in the study, the results provide a good outline for when alligatorweed should be “attacked” for the best possible results.