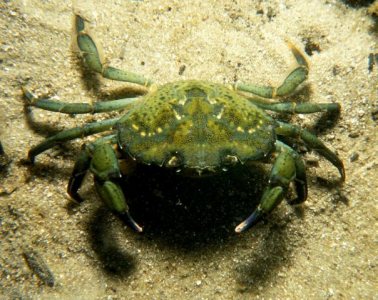 Green crabs have invaded both coasts of the US, from Europe. Photo from forums.pocketgems.com

The green crab (Carcinus maenas) is a well-adapted species worldwide, native to Europe and transported throughout the globe through ship ballast water as larvae. They are successful, aggressive competitors amongst other crustaceans and native organisms in their expanding ranges, and reproduce rapidly while tolerating a wide temperature and salinity range. Together, these aspects make for an apt invader. The green crab has been moving up the eastern coast of the U.S. for decades, and has recently established in the Gulf of St. Lawrence. In this region, adult crabs overlap spatially with juvenile American lobsters in the subtidal to 10 meter depth zones. A 2006 study by Rossong et al investigated the potential for these invasive green crabs to out-compete native organisms, specifically vulnerable juveniles. In multiple experiments, green crabs were seen to spend 98.8 % of the trial period feeding whereas lobsters only spent 1.2 % of their time at the bait. The crabs and lobsters were placed in the same tank for the studies, so these percentages are an indication that the green crabs were superior competitors for limited resources (food). If a lobster attempted to displace a crab to gain access to food, it was unsuccessful the vast majority of the time. Surprisingly, the adult green crabs actually began preying on the juvenile lobsters during shelter experiments. American lobsters are economically and ecologically important, bringing in $300 million a year in the state of Maine alone. The implications of this study are far-reaching with regards to the potential negative effect of these invasive crabs on native populations due to competition for limited resources: food and shelter. A suggestion for future research would be to examine plasticity in native crustaceans to determine whether or not these natives can successfully adapt to the invasive green crab presence over time to avoid negative population impact/displacement. 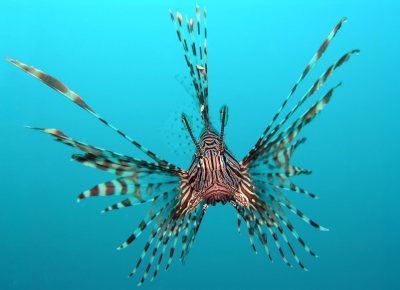 Lionfish were introduced from aquaria into the Atlantic Ocean in Florida in the 1980s, and have since become dominant in the southeastern US and Caribbean. Photo from en.wikipedia.org

The Pacific red lionfish (Pterois volitans) is native to the Indian and Pacific Oceans, but do not exist in very high abundance there since the population is checked by natural predators such as eels, frogfish, and scorpion fish. The first few lionfish were spotted off the coast of Florida in the Atlantic in 1985, but by present day their range has expanded as far north as Cape Cod and as far south as southern Brazil. Being an extremely popular aquarium fish, their initial introduction is thought to have been from release into the Atlantic by humans. A second wave of lionfish are also thought to have been released in 1992 by hurricane Andrew with the destruction of several aquaria pipes, and triggered the exponential growth of the lionfish population. Lionfish are in highest abundance in the Caribbean, and continue to grow exponentially with the lack of natural predators in the Atlantic and Caribbean. Due to their cryptic appearance complete with venomous spines, and their slow moving nature, they often look like seaweed and are not bothered by the normal predators in their introduced geographic range. With a lack of predation, this invasive species introduction has often been labeled one of the potentially most ecologically harmful marine fish introductions to date. Lionfish are able to thrive in most habitats, eat most smaller marine fish species, have high competitive ability, and extremely high reproductive rates, allowing them to increase their population size virtually without any checks to hinder the growth. Their presence in the Bahamas has caused declined recruitment of other fish species by 79% to date, while similar predators in the Bahamas only caused a decrease of 35%. Albins and Hixon (2010) outlined a “worst case scenario” that would be caused by the lionfish introduction, combined with other negative impacts like overfishing of other species in that area. If the growth keeps going unchecked by predation, soon their range will only be restricted by water temperature, and the only species that will continue to coexist would be sharks and rays. This may eventually lead to within species competition and cannibalism, once they have wiped out all of their prey species. To avoid more of these negative effects, periodic collections by divers, or “lionfish derbies” are becoming more popular in Florida and the Bahamas in a race to catch as many lionfish in one day. These “derbies” are followed by lionfish cookouts, in order to encourage a more popular lionfish fishery. Best case scenario would be natural agents of biotic resistance, where predators, pathogens, parasites, or competitors will evolve to compete with, or prey on lionfish to begin to get their population in check. In the meantime, encouraging the lionfish fisheries is our best option to attempt to preserve the biodiversity of marine fishes in the Atlantic and Caribbean.