Overfishing of Bluefin Tuna and Sharks

Sexual Segregation in Pelagic Sharks and Threats from Overfishing 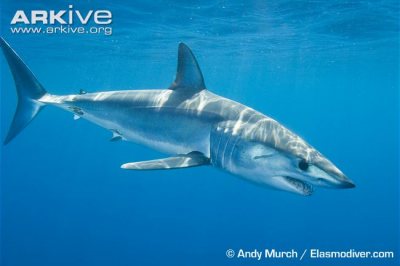 Shark fin soup is a popular delicacy in Asians countries where a bowl of it can cost up to $100. Because of its high demand, there has been a steady increase in the amount of fishing for sharks, especially in the last 15 years. The large amount of fishing for sharks has lead to a decline in their populations across the globe, which has proven detrimental to the surrounding marine environment. A reduction in the populations of apex predators has lead to trophic cascades, which have caused the surrounding marine communities to become unbalanced. In “Sexual segregation of pelagic sharks and the potential threats from overfishing”, Mucientes et al (2009) looked to see if there was sexual segregation in the shortfin mako sharks (Isurus oxyrinchus) and the blue sharks (Prionace glauca) and if there has been high rates of fishing in areas where one sex is mainly located. A four month experiment was conducted on a Spanish longline vessel fishing in the southern Pacific ocean, where I. oxyrinchus and P. glauca were caught and evaluated for their gender. They also compiled data from historical fishing records from the last half century to see where most of these sharks have been harvested. The areas where P. glaucaI was caught mostly contained males so the authors believed that sexual segregation for this species could span a wider range than the areas tested. I. oxyrinchus was found to have two separate areas for females and males. Historical fishing records showed that there has been higher rates of fishing within the area containing mainly males. This could prove to be detrimental to the population as a reduction in one sex would reduce the reproduction rate. These large pelagic sharks already have a low reproduction rate. If this is exacerbated even further, the population would have a harder time recovering from high fishing rates. To regulate the effects of fisheries, there could be regulations on fishing vessels to fish in areas where there are an even distribution of both males and females. This would allow pelagic shark populations to maintain their normal reproduction rate and therefore, have a better chance of keeping up with harvest rates.

“Habitat mapping of the Atlantic Bluefin tuna derived from satellite data: Its potential as a tool for the sustainable management of pelagic fisheries” -Jean-Noel Druon 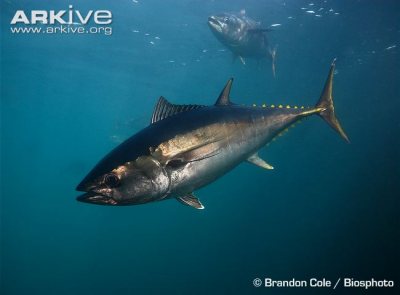 Atlantic Bluefin Tuna are endangered and are overfished in areas where they aggregate to spawn.

As of 2010, the critically endangered Atlantic Bluefin tuna (BFT), which has the largest spawning stock in the Mediterranean sea is at an all time low and continues to decline daily. Starting in the 1980s, a demand for Japanese sushi and sashimi triggered a dramatic decline in BFT populations, which resulted in innovative and effective fishing technologies and an overall lack of biological knowledge about this apex predator. To make matters worse, not only is roughly one-third of BFT fishing illegal, unreported, and undeclared, the Mediterranean sea  also happens to be the largest BFT fishing industry. In order to prevent a complete collapse, earth observational data was used to pinpoint the habitats of the two most characterizable habits in most fish: feeding and spawning. By using night surface sea temperature and surface chlorophyll content data, habitats could ultimately be located, but this would also guide the fishery management towards restricted areas to better manage them. Since BFT are visual hunters of schools of foraging fish such as herring and sardines, clear waters provide the best hunting conditions. Therefore, a medium chlorophyll concentration ranging from 0.11-0.38(mg/m3) constitutes the feeding criteria. Also, by thermoregulating their body temperatures, BFT feeding habitats are more dependent on the distance from certain thermal fronts (below 10-20km). By compiling this data, researchers were able to pinpoint the highest frequency of BFT and locate the specific areas that meet these requirements. The same application was applied for spawning habitats. By also taking into consideration the specific zooplankton prey for larvae, the highest frequency of BFT were found in areas where the SST data was around 20 degrees celsius, and surface chlorophyll content ranged from 0.07-0.13(mg/m3). In essence, by using satellite data to determine the highest frequencies of BFT in their various habitats, greater protection can be placed on these areas. By completely closing the spawning area from May to July, BFT would significantly benefit from increased recruitment since they would not be picked off in their spawning area. Once the population reaches a healthy level, fishing could be opened up during the second half of the spawning season, which would not damage the fishing industry from an economic standpoint. However, fishing could only be opened again once the BFT had time to ensure recruitment or this would increase the chances of a population collapse. Aside from allowing the BFT to reach a healthy population level, habitat mapping is cost effective because fleets are able to concentrate their resources and management/enforcement is also better concentrated. Most of all, scientists would be able to gain substantial scientific knowledge because they would have a large and viable BFT population to work with.