Polar bears are threatened by fragmentation of sea ice which could restrict their movements.

are sea ice-dependent carnivores that are greatly affected by sea ice habitat fragmentation. While anthropocentric activities have caused habitat fragmentation in terrestrial environments, climate change has become an important driver for the disruption in marine environments. Polar bears have become increasingly vulnerable to fragmentation due to the fact that their life history (such as movement patterns, energetics and population trends) is reliant on the ice phenology of the Arctic region – ranging from total cover to spotty ice cover. By using fragmentation metrics and national snow and ice data, researchers were able to get a sense of the composition and configuration of the ice in the regions of Hudson Bay, Hudson Strait and the Foxe Basin. Configuration of the ice was determined through satellite technology while the compositions of ice throughout the three regions were classified into four categories: non-habitat, poor, good and best conditions of ice.  Through this data collection, it was determined that there were negative trends in the best habitat patch sizes for polar bears, an increase in undesirable conditions, and an increase in icescape heterogeneity. These conclusions connect to broader implications for polar bear populations as ice fragmentation create difficulties with transportation, reduce on-ice foraging time when hunting, increase energy costs for preying periods, reduce caloric intake and ultimately affect cub litter size. These implications need to be further studied, however, there already seems to be linkages between ice fragmentation and noticeable differences in biological attributes of polar bear populations. Therefore, it is likely that the these physical attributes among polar bears will be amplified as climate change progresses and ice fragmentation presents obstacles towards the life history of the polar bear. For that reason, it is important to continue to gather evidence on sea-ice fragmentation while also solidifying the link between this Arctic fragmentation and the reduced body conditions of these polar bear populations.

Ecosystem fragmentation and its endemic effects on livebearing fish and piscivores 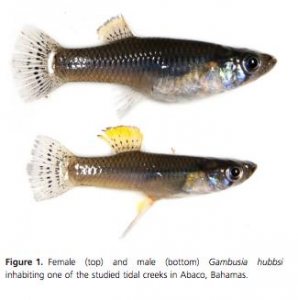 Live-bearing fish like Gambusia actually thrive in fragmented habitats because of the decreased abundance of piscivorous fish (their predators).

Human-driven habitat degradation and fragmentation is resulting in a loss of biodiversity in many of the world’s marine ecosystems. One such ecosystem is that of the tidal creeks off the coast of Abaco Island, Bahamas. Degradation of the tidal creek ecosystem is due mainly to road construction across tidal creeks, often near creek mouths. This produces a detrimental blockage, causing a reduction in hydrological cycling between wetlands and adjacent marine areas. Such nutrient reduction and cycling, results in a severe decrease of piscivore abundance. Due to this predator release in degraded and fragmented areas, livebearing fish abundance is increasing, and in turn, intraspecific competition is also increasing. In a study performed by Araujo et al., the livebearing fish Gambusia hubbsi was observed with its predatory piscivorous fish. The study looked at a range of sites on a gradient from high to no connectivity, collecting data for a range of variables including pH level, salinity, and conductivity. Samples of Gambusia individuals were taken from representative sites, measuring weight, age, sex, and gut content. From this study, researchers found that top predators (here piscivorous fish) are highly vulnerable to altered community structure and ecosystem function. They found that habitat fragmentation caused a decrease in piscivore densities and, due to predator release, an increase in Gambusia densities. Due to this increase in Gambusia abundance, intraspecific competition also increased among these populations, which resulted in a higher variation of food selection. It is unknown how this interindividual variation, or individual specialization, will affect Gambusia populations, but fragmentation is suspected to weaken the species and cause harmful alterations in ecosystem communities. Behavioral changes in Gambusia populations can also result from competition, which may negatively impact predator abundance and ecosystem biodiversity in fragmente