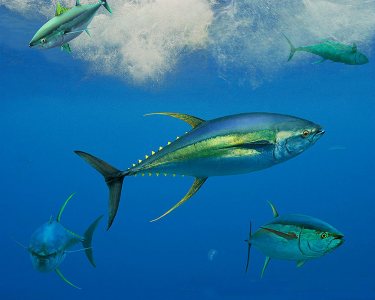 Bigeye tuna are fished via huge purse-seine nets. This fishery could be more sustainable with different fishing practices including the depth and location of fishing. Photo from tunaseiners.com.

For my presentation on a scientific paper in “Global Change in Marine Systems”, I looked at a scientific paper titled the “Effects of Gear Characteristics on the Presence of Bigeye Tuna (Thunnus Obesus) in the Catches of the Purse-Seine Fishery of the eastern Pacific Ocean.” The paper, written by Cleridy E. Lennert-Cody, Jason J. Roberts, and Richard J. Stephenson, explored the effects of gear characteristics on the catch of bigeye tuna to motivate a search for a practical means of reducing the catch of bigeye tuna. The most recent stock assessment for bigeye tuna indicates that fishing mortality remains too high to maintain a stable bigeye tuna population. In contrast, the skipjack tuna population remains healthy and stable. Therefore, a management goal has been to find means of reducing catches of bigeye tuna in the purse-seine fishery on floating objects while minimizing losses of skipjack tuna catch. Modifying gear characteristics of the purse-seine nets may reduce bigeye tuna catch because the two different species of tuna typically inhabit different depths around the nets. Bigeye tuna tend to be found in deeper water than the skipjack tuna. Thus, the study focused on gear characteristics related to the fishing-depth of the purse-seine and the length of material hanging below the floating object at the top of the net/purse-seine. The paper’s analysis of the presence/absence of bigeye tuna catch in purse seine nets from 2001-2005 found that object depth of the purse-seine and location were most significant. Thus, the paper concluded that fishers can alter their fishing practices and reduce the amount of bigeye tuna being caught in their purse-seine nets by a) changing object depth b) changing the overall depth of the hanging material from the object and c) changing the overall location. 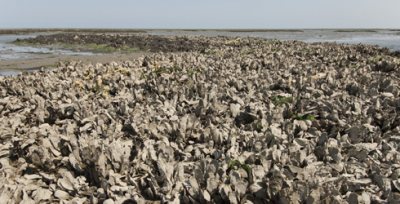 Oysters in the Chesapeake Bay have been depleted by overfishing. Population growth is limited by disease and sedimentation. Photo credit Mark Godfrey © 2009

For my segment of the presentation, I discussed at the scientific paper “Decline of the Chesapeake Bay oyster population: A Century of habitat destruction and overfishing.”  This paper, written by B.J. Rothschild, J.S. Ault, P. Goulletquer, and M. Heral is about the declining oyster populations in the Chesapeake Bay.  They start out by giving a brief background on the industry since the early 1800s and how the oyster harvest levels have fluctuated.  After discussing a variety of different reasons from current literature that explain the decline in oyster populations such as reduced water quality, diseases in the bay, and pollution, they offer their own reasoning.  This paper argues that there are two other reasons that are actually much more detrimental. The two main reasons they blame for the decline in oyster population are harmful fishing practices and overfishing.  The harmful fishing practices, they found, are a result of both an increase in technology and people capitalizing on an opportunity to make money.  The technology became more efficient over a 200-year period with hand tongs during the 1800s, oyster dredges in 1865 when it became legal and then hydraulic tongs in the 1900s.  They found that over the years, the techniques became more invasive and more damaging to oyster bars.  Essentially, they argue that these more mechanized ways of harvesting oysters have leveled oyster bars.  The methods they used were superimposing the data from 3 different studies during different time periods ranging from 1907 until the 1990s.  All of these studies focused on total oyster bar area, known as “shelled area,” on the Choptank River Lighthouse Oyster Bar.  After superimposing the data, they plugged it into a growth model to asses oyster bar growth.  This provided them with a stock assessment that gave them yield per recruit and average density.  They found that over the 3 studies, from 1907 until 1990, there was a 52% decline of oyster habitat.  To put that in perspective, during the 1907 study, 25% of the entire bay was considered to be oyster bar habitat.  Given these results, and the consideration of the fishing techniques they looked at, they offer a 4-point management strategy.  This four-pronged strategy involves fishery management, repletion, habitat replacement, and implementing a broodstock sanctuary.  Although not implemented yet, these scientists argue that for economic, water quality, and biological reasons, the oysters need to be protected because of past exploitation that occurred as a result of technological improvements.