Disturbance in the Antarctic and Fouling Communities

Fouling macroalgae on a boat hull. Photo from invasives.org.au.

My case study was titled “Influence of Disturbance and Nutrient Enrichment on Early Successional Fouling Communities in an Oligotrophic Marine System” which was written by Joao Canning-Clodde, Manfred Kaufmann, Markus Molis, and Mark Lenz. The study focused on testing the disturbance of habitat structuring due to the effects of successional fouling in a nutrient deficient marine habitat in the Bay of Funchal, Portugal. A three factorial experiment was conducted to test nutrient availability, block (specific type of nitrogen alteration), and disturbance frequency. The results showed that increased levels of fertilization enhanced community diversity by favoring the establishment of macroalgae species. Specifically for fouling, there was an increased species richness found in the experimental groups with increased nutrient levels. Also, the direct effects due to disturbance displayed a relationship to the nonexistence of competitive exclusion present in the habitats. The study portrayed a correlation in species vulnerability to disturbance in regard to those organisms that were the most sensitive to increased nutrient levels as seen through a multiple-stressor model. In conclusion, the fertilization improved the macroalgae species which were otherwise not present in the oligotrophic experimental groups. This suggests that the addition of nutrients has the possibility of decreasing the impact of a limiting factor. This is an important issue to focus efforts of control towards because increased abundance of species impacts the existing populations by outcompeting them, and decreasing the amount of nutrients and resources available. This has an overall negative impact to marine ecosystems by altering the dynamics of the population. The increased nutrient levels can also lead to increased occurrences of harmful algal blooms, which further alter habitats and cause dead zones. This cycle results in habitats not having the ability to recover, resulting in a net loss of habitat and species diversity. Therefore, there needs to be increased regulation on fouling to preserve habitat dynamics and maintain a healthy balance within marine ecosystems.

“Anthropogenic and Natural Disturbances to Marine Benthic Communities in Antarctica” 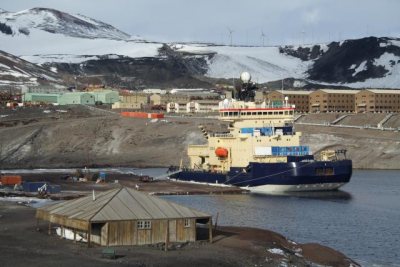 This paper described the changes in the marine bottom communities when exposed to different anthropogenic and natural contaminants and disturbances. It also documented the rate of recovery for certain affected communities. The area in question was McMurdo Station which happens to be the largest human settlement in Antarctica. Sampling and field experiments were conducted from 1975 to 1990 and analyzed. The marine environment in Winter Quarters Bay has been heavily contaminated with anthropogenic chemicals coming from the unloading ships and the former disposal area. Areas not as affected by the anthropogenic chemicals were found past the jetty in Cape Armitage. Natural disturbances were also looked at. Iceberg grounding and anchor ice formation closely resemble the effects of trawling and dredging without actually having the anthropogenic damage. To collect the data, scuba divers took large sediment cores to look at the organism abundance and contaminants in the area. The results showed that there were greater densities of organisms farther away from Winter Quarters Bay. This shows that in the bay where most of the anthropogenic contamination happens is where the least organisms are; and the most organisms are found around Cape Armitage farthest away from the bay. Looking at the natural disturbances, there were more organisms found in areas not affected by iceberg grounding and or anchor ice formation and little to no organisms found in areas affected by these disturbances. The area around the Jetty gradually declined the organism abundance and the area near the former disposal area had higher than expected numbers of top dwelling organisms but lower numbers of opportunistic species. This can be explained that the top dwellers can move in and out of the range of the sewage outfall in this area and aren’t stuck like most opportunistic species are. The time of recovery for these benthic communities depended on the location. It would take around 6 years to recover the communities at the Jetty where it would only take about 2 years to recover in the outer bay area. In conclusion, anthropogenic disturbances in McMurdo Station in Antarctica negatively alter the benthic communities in the area. The amounts of contaminants in the bay and around the jetty significantly affect the benthic communities and in areas with iceberg grounding and anchor ice formation, the organism life declines. To help these organisms recover, dredging and trawling should be reduced to little or none, and the former dump site should be more closely monitored. Lastly, the ice dock where the ships come in and out should be more aware of the communities they are affecting.