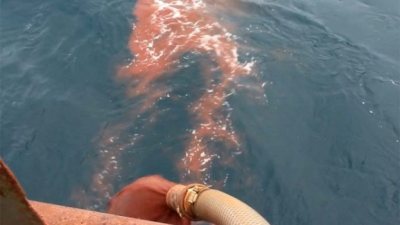 Iron solution being added to the ocean to stimulate a phytoplankton bloom. Photo from officerofthewatch.com.

My case study for Bio 209 was entitled “Deep Carbon Export from a Southern Ocean Iron-Fertilized Diatom Bloom” by Victor Smetacek, et al, published in 2012. This study was centered on the idea of iron fertilization of the oceans. This idea was first made popular in 1988 when John Martin famously said “Give me a half tanker of iron and I will give you an ice age.” Although he was mostly joking when he said this, the statement was provocative enough to catch the interest of the scientific community. Iron fertilization of the oceans is based on the fact that iron is a limiting nutrient in much of the open ocean. If large amounts of iron are added to an area, it is no longer limiting, and therefore that area can support much more life than before, especially in the form of phytoplankton blooms. Large phytoplankton blooms require huge amounts of CO2 from the water in order to photosynthesize, and they use enough that CO2 is actually drawn from the air into the water. The idea is that if this process occurs on a large enough scale, enough CO2 will be drawn out of the atmosphere to alter the climate and lower global temperatures. Previous studies have been done over the years to test this hypothesis, and found that phytoplankton blooms do indeed occur if the open ocean is fertilized with iron, and that CO2 is drawn out of the air to support them. However, studies in the past have not been able to prove that the carbon sunk deep enough in the ocean to be successfully sequestered.

This study was similar to other iron fertilization studies. An eddy in the Southern Ocean, near Antarctica, was selected for the location of the fertilization, and an area of 167km2 was treated with iron sulfate. The eddy area was then monitored for five weeks. Variables monitored included the vertical distribution of particles within the patch, the movement of the patch, the population growth of species of phytoplankton living there, and the rate and type of particles sinking out of the patch to the ocean below. The study found that there was a large phytoplankton bloom that resulted from the fertilization, which was proven by the increased amounts of chlorophyll and silicate within the patch versus outside of it. Monitoring of movement of the patch revealed that it did spread out within the eddy, but did not leave the eddy itself, proving that these experiments can be contained enough to be effective over a long period of time, rather than dispersing rapidly. However, the most significant finding from this study was that the particulate organic carbon, or POC, was found to be sinking below 3,000m of depth in the ocean below the patch. As stated earlier, previous studies had only been able to document carbon particulates sinking to about 500m, which is still shallow enough for currents and organisms to cycle it back to the top and release it back into the atmosphere. A depth below 3, 000m is deep enough in which this doesn’t happen, meaning that carbon has successfully been removed from the atmosphere and sequestered for up to centuries on the ocean floor.

This study was therefore the most successful of its kind to date because it proved that this method can function effectively as a climate mitigation technique. However, it is important to keep in mind that these are small scale effects relative to the global climate. To actually make this technique change the global climate, huge amounts of iron would have to be continually dumped into the oceans all over the world. These types of actions quickly become unfeasible at such a large scale, and the environmental impacts would surely be grave and significant. Therefore, while this method of mitigation is interesting and effective on the small scale, it would not be practical when applied on a global level. 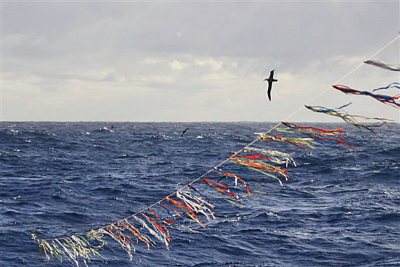 Tori lines behind a boat. Photo from news.yourolivebranch.org

The scientific journal article, “Mitigation of Seabird mortality on Factory Trawlers: Trials of Three Devices to Reduce Warp Cable Strikes”, is a very interesting study concerning seabird mortality prevention. The study tested the effect of three different devices (tori lines, Brady baffler, and warp scarer) that claim to reduce the amount of seabird-cable collisions and dead birds caught in the net. Although low statistical power prevented the mortality rate to prove a 95% confidence interval, two of the three devices (tori lines and warp scarer) proved to significantly reduce seabird-cable collisions. This study is helpful to both scientists and fishermen reduce the potential deaths of an organism vital to the marine ecosystem.