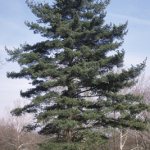 White Pine, which is sometimes called Soft, Sapling, Pumpkin or Weymouth Pine, is often found in the Newfoundland and the Manitoba provinces of Canada. Within the United States, white pines can be found in southern Iowa, northern Illinois, central Indiana, eastern Ohio and Pennsylvania. White pines also follow the Appalachian mountains down to Georgia. To distinguish white pine from other types of trees look at its needles. White pines have long, soft bluish green needles that bundle together in groups of five. Also notice the branches, which grow in a whorled pattern. White pines can easily grow to be over 200 feet tall and more than six feet in diameter. Its pine cones grow to be 4 to 8 inches when mature, and are a light reddish brown. The seeds of the white pine are reddish brown with flecks of black. Bark on young white pine trees is smooth, but becomes furrowed as it matures. Internally, white pines have a soft, closed grained wood. While the sapwood of a white pine is white, the heartwood (inner core) is more of a reddish color.