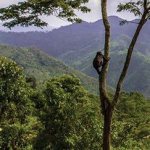 Hope for Gorillas in War-Torn Eastern Democratic Republic of Congo

Former Visiting Member of the Bates Faculty, and now Executive Director of the Gorilla Rehabilitation and Conservation Education (GRACE) Center

Sonya Kahlenberg is a biological anthropologist, and studied the behavior of wild chimpanzees in Uganda and orangutans in Borneo for over a decade. Fieldwork brought Sonya face-to-face with threats endangering great apes and motivated her to focus on conservation efforts. For the past 10 years, she’s worked with grassroots as well as international great ape conservation initiatives. Recently, she directed anti-poaching patrols and conservation education program in and around Kibale National Park in Uganda.  Since 2013, she has been the U.S.-based Executive Director for the Gorilla Rehabilitation and Conservation Education (GRACE) Center in eastern Democratic Republic of Congo. GRACE is the world’s only facility that cares for highly endangered Grauer’s gorillas orphaned by poaching and works to conserve wild gorillas through gorilla reintroduction, local education, and community outreach.

Sponsored by the Departments of Anthropology & Biology