Bartolome was an island comprised of little vegetation yet was still full of unforgettable sights that made each member of our group one with nature.

It may had been hard to start the day off with a 5:30 AM wake up call, but as you will see in the sights described below, it was well worth it. We took our group bus over the island of Santa Cruz and met our boat that would take us to Bartolome. 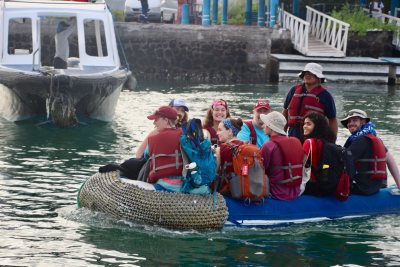 Part of the group getting shuttled to the boat

Our boat route took us right by the famous island Daphnie Major. This small island is the location of Peter and Rosemary Grant’s work on the Darwinian finch and was a major subject in our common reading assignment “Beak of the Finch” by Jonathan Weiner. Although we only witnessed the island in passing, it was still a surreal moment to witness an island where evolution by means of natural selection has been scientifically proven. Although we didn’t see any finches, we were able to see Lava Gulls, Nazca Bobbies and Frigatebirds flying far above.

An hour later, we were welcomed onto Bartolome by a curious sea lion that had perched itself right on the landing steps next to our dingy. 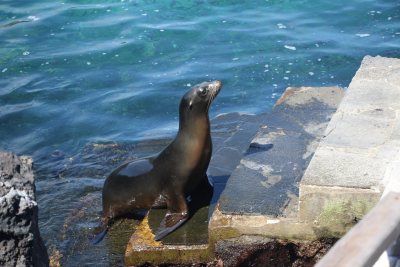 Sea lion that greeted us at Bartolome

ifferent planet. We were surrounded by lifeless orange colored Pahoehoe lava rocks, as well as some sporadic groups of the endemic lava cactus species. In my opinion, it was like we were on Mars! As a group, we discussed the various selective pressures that have been affecting the organisms that inhabit this barren island. These environmental selection pressures included high winds, extreme sun exposure, and water loss. We hiked up this volcano and got to see a beautiful view at the top. 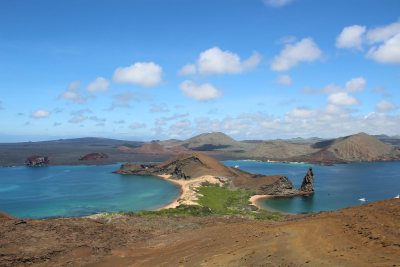 View of Bartolome from the top

After our hike down, we were all ready to dive into the cool ocean! As our captain tugged us to the near by dive sight, we quickly put on our wetsuits, masks, and snorkels, eager to see the marine life below. Believe me, we were not disappointed. As we snorkeled along the edges of Bartolome the group was able to see a Galapagos Penguin dive deep into the water, capture his prey, and swim back up to the rocks to enjoy his meal. This was a sight that was favored by the majority of the group. We also were able to see a white-tipped reef shark as well as a green sea turtle. Already on our first snorkel, we are seeing amazing endemic organisms that cannot be seen anywhere else on this Earth.

I love studying biology in these islands because all the animals are completely comfortable with approaching humans! Having the opportunity to openly share their habitat is something that is quite rare and I know, as a group, we are taking full advantage of. Swimming together with these animals in the ocean has put us on a new level of observation. Instead of reading about these fascinating creatures in a textbook, we are out in their world seeing how they live. This has really made us at one with nature and we can’t wait for more. Another day in paradise, checked off the list! Up next- North Seymore!