Written by: Emma, Class of 2019, majors in Biology and English

Today I saw more species than I ever thought I could see in one day. First, at the white sand beach on Santa Cruz, I saw a giant pelican that was stretching its neck out for everyone to see. There were more crabs than I could count. Some of them were relatively small and dark in color, so they blended into the rocks, but others were large and bright orange, making them an easy source of marvel. I was mesmerized by their ability to jump so far so quickly. The lagoon behind the beach brought us to a flamingo and some marine iguanas. Seeing the flamingo filter feed as I discussed in my field guide presentation was a very “full-circle” moment. The iguanas swam slowly through the water, as if they had nothing to do and nowhere to be. They avoided us, but they may have climbed back over the tortoise tracks to meet again with the open sea.

The snorkel at North Seymore was even more impressive than the one yesterday. The water was colder, so the fish were larger and we swam with sea lions! They were some of the first animals I saw after leaving the boat. There were 3 of them play fighting on the cliff and eventually 2 were in the water playing with us as well as each other. I had the hardest time pulling myself away from watching them, even at times when they were only basking on the cliffs. Even more amazing, though, was the baby fur seal taking a nap on one of the rocks closest to the water. It must have been only a few days old. It kept rolling around and tricking us into thinking it was going to come swim with us, but it never did.

Although walking around North Seymore was hot and buggy, it contained some of the most awe-inspiring sights of the trip so far. The island had the largest land iguanas we’ve seen as well as the highest number of birds I’ve ever seen in the same place. In every direction there were very large birds, sitting, sleeping, flying, or feeding their young. Today I truly experienced the reality that birds here are much less scared of humans than they are in other places. At one point I was a couple feet from a blue footed booby sheltering its day old baby! 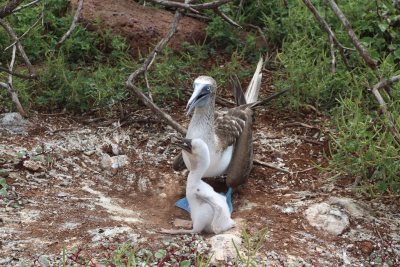 We saw a lot of booby dancing and quite a few male frigate birds with their red pouches puffed out (even though one was using his pouch as a pillow!). I am very lucky to be here in a season where I can witness mating strategies. 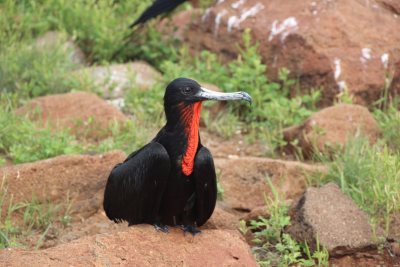 It was amazing to see so many different aspects of the Galapagos ecosystem today and I can’t wait to continue seeing more of it in the next two weeks.