Today we had an early 7:30 am class, because it was our community engagement day! We all met at the IOI, our normal meeting spot, and we were informed by an IOI staff member about how we would be helping them with their wetland conservation project. Specifically, we learned that we would help with the control of a super invasive plant species Paspalum vaginatum that the locals call Kikuyo. This is an introduced, perennial grass that grows in salt and brackish marshes and is a big problem for the area because it causes destruction of its habitat since it absorbs so much water that dries out everything around it. The location that this species causes the biggest problem is the South Isabella Wetlands, because it is a protected site (Ramsar Site 2002) and no pesticides not herbicides are allowed to be used there. The only way to prevent it from spreading is to remove it by its roots. That’s where we came into play. We were all given a pair of rubber boots, gloves, sacks, some rakes, bars and peaks and we were dropped off next to a pond where there was an abundance of this species. From the moment, I stepped on it I realized how strong its stems and roots are. We then split into groups of four and started to dig. It was a lot of work but I enjoyed it so much because I knew we were doing it for a good cause. At the end of the day everyone was covered with dirt, a mark of our hard work. Tomorrow we will be back for a whole day of community engagement. 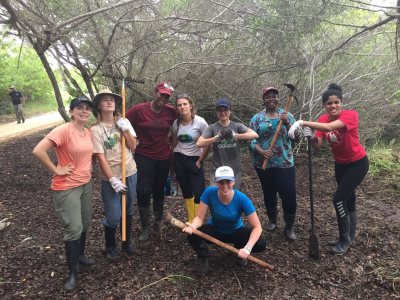 First day of our project!

Before the beginning of our community engagement project we had journal club. Everyone in the class was assigned to a research paper that had to read, be an expert on and present its findings in front of the rest of the class. In total, we had three groups and three papers that were all related with the Blue footed booby, a bird we have seen multiple times in our trip and is one of my favorites. We also got to enjoy some delicious pastries from a local bakery during our presentations. All three groups did a great job explaining their paper and engaging the rest of the class with questions. As a biology major, I believe that is important to be able to explain science to an audience that might not have an expertise on the field and journal club is the perfect preparation for that.

The highlight of the day was our dance class at 8:15pm. Amanda who is one the leader staff members of the IOI volunteered to teach us how to dance Bachata. Almost everyone in the class showed up and tried to follow Amanda’s instructions. Although I was terrible at it, I really enjoyed it. These kinds of dances require a lot and quick steps, which I personally can’t do. Both Larissa and Greg were very good at it and showed us how a professor can also have some fun.