Snorkeling in Tuneles and swimming under lava tunnels

Today we snorkeled twice to see some incredible wildlife and walked across naturally made lava tunnels which served as a nesting place for blue-footed bobbies.

We woke up early this morning and was on the water sailing to Tuneles by 8:30. Within 45 minutes we arrived at arguably the best snorkeling site in the entire Galapagos archipelago. The water was low tide and visibility was surprisingly good, which made it easy to spot the incredibly diverse marine life. Here there were dozens of vibrant fish species as well as expertly camouflaged sea-horses and octopuses, which are relatively rare to see. This area was also a popular place for giant sea-turtles to feed on algae. Scores of up to five turtles could be found all in the same area. I was told by our guide that these massive animals could weigh up to 250kg and swam so close to us that if we were to reach out our hands we would graze the backs of their shells. Of course everyone in our group had the proper self-control to not harass the animals in this way.

Next we sailed into the cove of Tuneles, which was well protected by rocks so our boat captain had to maneuver the boat quickly and with much skill. Due to the shallow waters, the only way to make into the cove was to find a large wave and ride the wave into the island, and avoid the large protruding rocks. This snorkeling site was completely different from the last. There was relatively few animals save a couple species of fish, but the water was crystal clear and all across the cove were naturally formed lava bridges. By taking a deep breath, I was able to swim under these lava bridges and felt like an explorer navigating some unknown world. This was an experience completely new to me and although I have been snorkeling several times by now, and feel like a pro, this was completely different. Underneath the bridges, lobsters could be found, hiding in the scattered crevasses. They camouflage well, but it was easy to see their eyes poke out of their body and watch me as I briefly inspected them before floating to the surface.

Once everyone was out of the water, we got to explore the tops of the lava bridges. 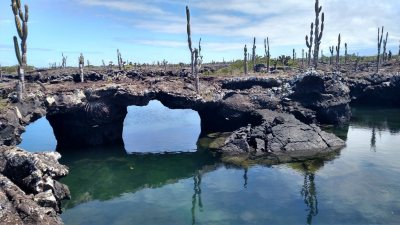 The black rock seems to twist and turn in a random order across the cove of Tuneles. The bridges were covered with prickly pear cactus and Blue-footed bobby nests. The months of May to December are considered the warm months in the Galapagos. Therefore, this time span is the most ideal time for Boobies to nest and raise their young. I was able to see booby couples sitting together making their strange squawk as their mates responded and shifts their position on the nest. Unfortunately, this was a popular destination, and we only had 15 minutes or so before the nest group arrived and made us leave. Overall, it was an incredible day of exploring and site seeing!
Categories: Uncategorized