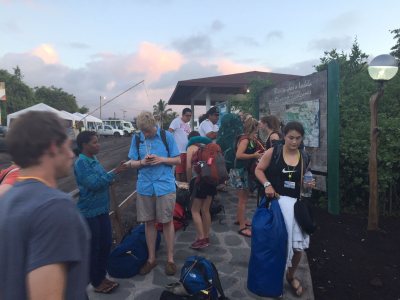 The group gathers at the port to leave Isabela.

Our last day in the Galapagos started dark and early as we gathered on the dock at 6 am for our boat trip back to Santa Cruz. The students were dropped off by their host families with many tearful farewells and invitations to always have a place in their homes on a return visit. The day before we had said our goodbyes to the IOI staff and especially Ms. Amanda and Filippe, who both worked so hard on our behalf throughout our stay in the Galapagos.  Amanda tells us they really appreciate how well our students behave and embrace the opportunity of being in such a remarkable place (secretly she says Bates students are the best groups they’ve had).  No arguments there!  Larissa and I have been so proud of gang since the beginning! 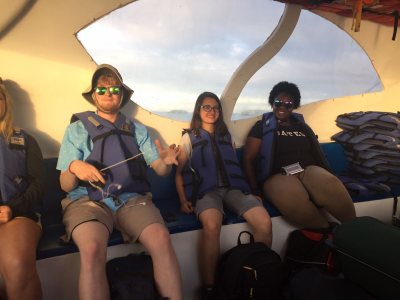 Ross, Maria Anna, and Brit settled in for the long boat ride to Santa Cruz.

After getting cleared by through the biological customs we loaded on the boat. The boat ride to Santa Cruz was aboard the Britthany, a large motor cruiser boasting triple 200 hp outboards on the stern. The seas were relatively calm and we flew, making it to Puerto Ayora in a bit under 2 hours. We were told by island old-timers that before the rise of ecotourism in the Galapagos, the crossing could take 10 hours. Doped up on Dramamine and scopalomine patches, we all pretty much sacked out during the trip, and all felt relief at reaching Puerto Ayora with few queasy stomachs. 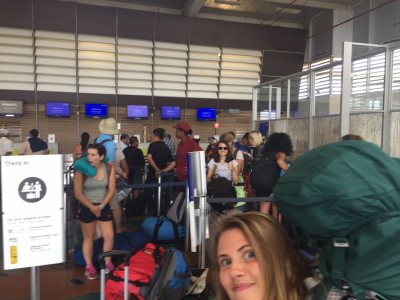 The gang gets checked in at the Baltra airport.

From the boat we hustled onto a bus which took us over the hill to the Atibaca channel between Santa Cruz and Baltra.  On Baltra we checked in at the airport and after a 1 hour delay and last minute souvenir shopping, we boarded our Latam flight to Guayaquil. The students were turned loose from the hotel to find dinner on their own. Most headed down to the Malecon (waterfront) a few blocks away to eat at one of the many restaurants along the strand. Larissa and I met up with my sister-in-law Judy to have supper near the hotel.

Our good night’s sleep was abruptly ended with a 5 am wakeup call from the front desk which took everyone by surprise except Larissa. Apparently she had requested the call for her room and the hotel automatically applied it to all of our rooms. Surprise! The hotel was very gracious and had breakfast ready for us at 5:30 am – 30 minutes earlier than usual – to accommodate our 5:45 shuttle departure to the airport. We made a smooth departure from Guayaquil after a short shuttle ride through empty streets (no surprise there) on Latam Airlines. Homeward bound!

Unfortunately, the back end of our flight was JFK and US Customs. Words fail me to describe the chaos of the customs hall at JFK. Under-staffed with a few exceedingly unpleasant traffic control people, some of us were in line for over an hour just to get passports stamped. Meanwhile, Larissa, who has “known traveler” status with TSA, breezed through, and rounded up all of our bags off the carousel. In the process, she discovered that several had not been checked through to Portland which necessitated rechecking them for the last leg. As we left the customs hall, there is a bag drop for connecting flights, but we were told that LATAM didn’t have an “understanding” with JetBlue and the bags probably wouldn’t make it our flight if we left them there.  Of course, the early students had already done so. The fate of their bags remains in limbo. [PS- I think they all made it.] After getting the bags mostly rechecked, we hit the security line and waited another 20-30 minutes or so only to be told our boarding passes (printed by LATAM in the Galapagos) could not be read by the security checkpoint reader, so it was back to the JetBlue counter to get our passes reissued and then back to the security line. We at least got to cut to the head of the line. Meanwhile, back at our flight, the flight was delayed two hours which had the positive effect of giving us some breathing room, but the negative effect of getting us back to Maine even later. So now, after all having found food, we are nearing the boarding time for our last flight to reach Maine. After the simple life of the Galapagos for the past two weeks, the re-entry to our homeland has been the bumpiest part of the trip. We will all be very glad to reach the Bates Bubble once again.

Arriving in Portland, we happily disembarked and made our way to the baggage claim. Although we knew about it, it was really heartwarming to see Mackenzie’s family enthusiastically greet her at the bottom of the escalator, so happy to have her home after the adventure of her life. After gathering our gear, we loaded up the bus and headed north to Bates. On arrival, we unloaded, said our temporary goodbyes as ev eryone headed off to their dorms and well deserved sleep after a long travel day. Home at last!

Despite my grousing about the JFK experience, this has been a fantastic trip and we are so proud of all of our students for their patience, wit, good humor, supportiveness for each other, and general goodwill throughout the course. As leaders of the trip we could ask for nothing better. Ciao!