We’ve made it to the Galapagos!

Today we actually arrived in the Galapagos! It was a two hour flight from the coast of Ecuador to a little island called Baltra where we landed. Baltra is a volcanic wasteland. There are a few small shrubs amongst the volcanic rock, but for the most part, nothing lives there. It’s an anticlimactic place to land within the Galapagos. After getting through customs, we headed down to a small water taxi to take us across to the island of Santa Cruz. Down at the water, we quickly spotted frigate birds, blue-footed boobies, and pelicans. Transportation on the Galapagos is always a nature tour. On our bus ride across Santa Cruz, we watched the landscape transform from rocky, arid terrain to lush, green forest. As we ascended into the highlands, the humidity increased and we were soon driving through a cloud. I was astonished by the dense, green forests. Coming back down on the southern side of the island, the jungle subsided and again the vegetation became more shrub-like as we entered Puerta Ayora.
Puerta Ayora is the town we will be staying in for the next three nights. It is a small town with a fishing port and lots of tourist attractions. It’s a beautiful town. The main street is all brick with cute little shops lining the sidewalks. There’s a nice wide bike lane, too! We had a late lunch of fresh tuna while overlooking the harbor. 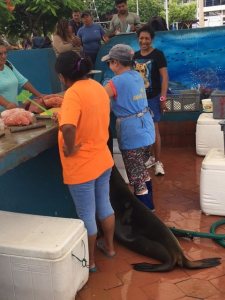 Then we headed to the Darwin Center which raises tortoises to release back into the wild. Within the center, we also saw a variety of birds – including Galapagos mockingbirds, a flycatcher, yellow warblers, and lots of different finches. The birds are not shy of people at all and fly from a cactus to swoop right over your head in search of a lava lizard to eat up or another branch to perch on. 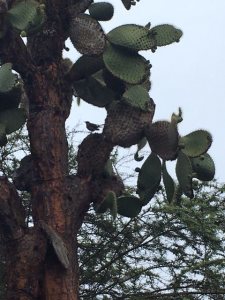 Bird on a prickly pear cactus at the Darwin Center

Darwin was fascinated by the birds and the tortoises on the islands, but contrary to what most people are told, he was far more interested in the mockingbirds than the finches. He even threw finches from different islands in the same bags for his collection, because he thought they were the same from island to island. It was not until he returned from the Galapagos and consulted with expert ornithologists in England that he began to realize the variety of finches throughout the Galapagos.
We are all incredibly excited to actually be on the Galapagos now, and I think I speak for everyone when I say that today definitely lived up to all of our expectations! It was just unbelievable how many animals we saw and how comfortable they were with our presence. Walking down the street, we saw a sea lion right up against an Ecuadorian woman’s leg begging for the scraps from the fish she was cleaning. We saw marine iguanas sound asleep on the side of the walkway. I can’t even begin to name all of the species we saw today and I know we just barely scraped the surface. We haven’t even looked in the water yet! I couldn’t be happier to be here and more excited to head out tomorrow on the water!
Categories: Uncategorized