Today was our first full day of our community project, which we have spent removing invasive grass from a wetland in southern Isabela.

Okay, so imagine that you have a really big back yard, which happens to be a giant wetland. Now imagine that in that backyard you have really thick grass. When you pull the grass up, it is as tall as you. On the ground, it is one big tangled knot, sort of like most of our hair after every snorkel. The tangled knot is about the height of your knees. Now imagine that the roots of the grass are even more tangled than the blades of the grass, and that virtually all of the plants are connected in a mat that extends about 6 inches underground. Now imagine the heavy scent of sulfur, a lot of mud, extreme heat, humidity, and equatorial sun. Your task is simple, get rid of all of the grass and all of the roots, using clunky tools that are pretty hard to lift. 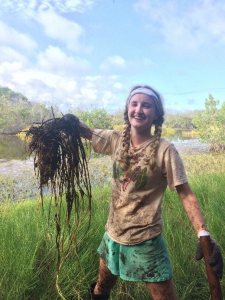 Mary with a patch of grass

Throw in a couple of cockroaches and some fire ant hills and you get the gist of what we’ve been doing for our community project. Our job is simple; remove all of the invasive grass to protect the wetland and the species who utilize it. There isn’t a lot of fancy equipment on Isabela, so this is a job that must be done by hand. If anyone has seen the movie “Holes,” what we’re doing is a little bit like that, except it’s more like “Holes: tropical edition.” Our work site is alongside a fairly busy bike path, and most tourists seem think we’re doing time for somethin’ pretty serious. 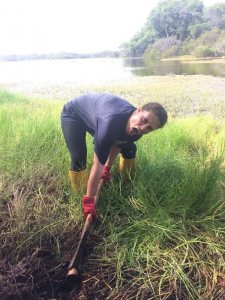 Mackenzie digging the grass up

Spirits are undoubtedly low, but we’ve found some ways to make it fun. Brian brought his speakers today, and a little friendly (or not so friendly) competition has helped the time go by. 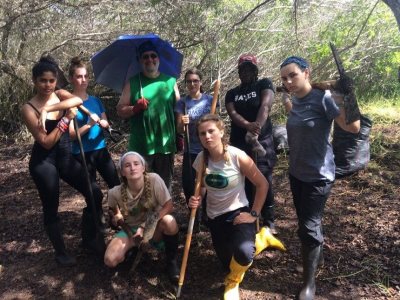 One group preparing to dig up the grass

There may or may not have been some spontaneous dance parties. For those of you who are curious, it’s true, Greg’s salsa skills are as good as his freestyle dancing. He may or may not prefer Ke$ha. Although tedious and somewhat painful, this project is important for two reasons. First, it helps protect Isabela’s wetland and maintain their status as a Ramsar Wetland site (for those of you who don’t know, having the Ramsar stamp is a bit like having a wetland that’s like a World Heritage site). Second, it has allowed us to interact with the Galapagos environment as more than just students or tourists. 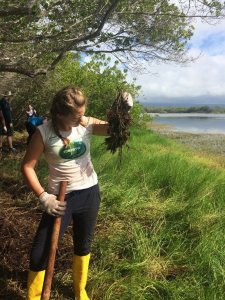 This stuff smells REALLY bad and has lots of worms and other crawlies in it. Emma thinks she might have found a parasitic worm on her arm. Don’t worry, she pulled it off before it could make its way under her skin.

The invasive we are battling, Pennisetum clandestine, was introduced to the Galapagos by ranchers in the highlands as a source of food for their cattle. Unfortunately, it has spread to the lowlands, where it thrives in wetlands. This invasive basically chokes up the wetland by absorbing all of its water. This is problematic because wetlands here are crucial habitat and breeding grounds for many fish and bird species. They can also act as a natural “water filter.” Our community coordinator told us that some of the species impacted by this invasive include marine iguanas, Galapagos hawks, lava gulls, Galapagos penguin, sea lion, green sea turtles, stilts, and flamingos. At this point, I think most of us feel we have a personal vendetta against this plant. It’s really pretty terrible.
I do not want to romanticize the work we’ve been doing. It’s exhausting, not terribly satisfying, and all the grass will probably grow back within the next month. On the other hand, I do think this project is valuable for us in that it has given us a new method for interacting with our environment. Thus far, we have been tourists, professors, and students. We have been observers, snapping pictures of birds with fancy cameras and catching glimpses of flashy fish through foggy (and some de-fogged) snorkel masks. We’ve stayed on the boardwalk and we’ve followed the guide. We’ve looked and not touched. Today, however, we’re doing a lot more than looking at the land. We’re raking it, pulling at it, and stabbing it with this weird metal pole thing that none of us can quite figure out the purpose of. Most of us probably still have bits of mud beneath our fingernails and in our hair. There’s so much mud on me that I’m starting to question how many showers it will take for me to get through the biological security checkpoints on the way home. I better start scrubbing now if I want to make it back to Bates! All jokes aside, this experience has been valuable in that it has shown us why biological security is so important for the Galapagos, as well as burned a hole through the illusion that we’re on an extended tropical vacation.

In between our morning and afternoon warfare on kikuyu, we’ve spent our time at the beach, working on lab write ups, or trying something new at the bakery. Today, Kayleigh Alex and I found the town “Empanada Lady.” She makes some crazy empanadas. Tonight we are all excited for Amanda’s second salsa lesson. Hopefully tonight there will be looser hips and less purple toes.