A hike up Sierra Negra

We ended our fabulous trip in the Galapagos with a hike up Sierra Negra, one of the five volcanos on Isabela.

The day started early, meeting at the Intercultural Outreach Initiative (IOI) at 7am. We packed sandwiches and Oreos, slathered on the sunscreen, and laced up our shoes and boots. After we filled our water bottles, we got on our chiva and drove up to the volcano through the highlands. Arriving after about 45 minutes, the weather had drastically changed from town.

When we left town, it was warm and sunny. However, when we arrived at the head of the volcano trail, the air was very moist, turning into rain at times. Alfredo was our guide for the day. Alfredo moved to the Galapagos in the 70s, before tourism started in earnest. He and I talked a lot about how the islands have changed over time—but we both agreed that Isabela still holds the special “Galapagos” feel. Most of its streets are unpaved, it has a long beautiful beach, and very few residents (less than 3000). Alfredo led the hike, stopping to point out flora and fauna that was both endemic and introduced.

We reached the caldera of the volcano around 9:30am. It was mostly covered in clouds. 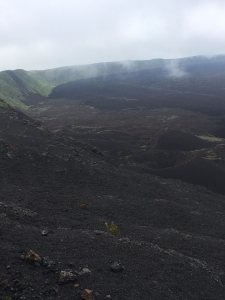 As the second largest in the world (only 4km less than the largest is Ngorongoro in Tanzania), the caldera is 10km wide. Since the caldera was mostly covered with clouds, we hiked up a new trail (only a year old) to the chimney of the volcano. 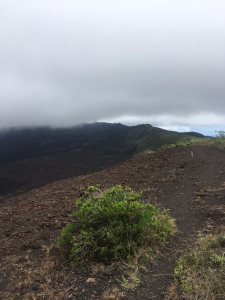 Trail to the chimney of Sierra Negra

The last two trips I have taken up Sierra Negra involved hiking down to Volcan Chico, but this time we hiked above it. The trail was really nice, giving us great views of the caldera and Volcan Chico. We stopped at the top of the chimney to eat—although we didn’t stick around for too long given the yellow biting flies. Hiking back we enjoyed the views and reflected a lot on what we had seen on the trip. The last 30 minutes of the hike were in the pouring rain. We were elated when the chiva that transported us down to town arrived to sunshine around 300m above sea level. We arrived back to IOI around 2pm and the students enjoyed their last day on the island, most spending the afternoon on the beach. We certainly will miss this little piece of paradise when we leave.
Categories: Uncategorized

A men's runner lost a shoe. A women's runner opened up a Secretariat-like lead. And both men and women advanced to the NCAA national meet in spectacular fashion.