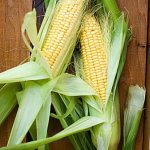 Corn is a sturdy stalk in the Poaceae family that grows to be about fifteen feet tall. It has large ears at the tops that act as a protective layer around the kernels inside. There are five main varieties of corn used in agriculture: Dent Corn, Flint Corn, Sweet Corn, Popcorn, and Flour Corn. Corn was first used by Native Americans who then domesticated the crop about 10,000 years ago in Mexico. The corn pictured to the right was harvested from a field in Mexico. Today, it is completely domesticated and absolutely reliant on agriculture and human cultivation of it. Over time we’ve produced different strains to cater to our high demand and varying needs for it. We use corn in our food, mainly for the ingredient high fructose corn syrup. It also feeds livestock such as cattle, chickens, pigs etc. and has become a key ingredient in the development of biofuels as an ethanol feedstock. In fact, the level at which we are mass producing corn is becoming detrimental; causing smaller farmers to go out of business, landscape diversity to decrease dramatically, and natural pest control to be completely thrown off. For states such as Iowa, Michigan, Minnesota, and Wisconsin, where farming is a major industry, these changes are very visible.

Scientific Name: Vaccinium —   (depending on specific variety; there are 43-45 in total) 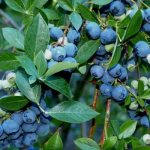 As stated above, there are many varieties of blueberry, most of which grow in the New England region. As the name would suggest, the blueberry is a berry, which is a fruit with a soft, fleshy exterior used for protecting an inner seed. The plant has been described as being fairly resilient – it is not unusual for it to be found in surprisingly diverse areas, ranging from cliff sides and ledges to rural meadows and fields to forested woodlands. The blueberry’s signature “true-blue” color is due to a pigment called anthocyanin, which, when broken down, releases shades of blue and red. The blueberry is a shrub, meaning it has multiple stems growing from the base: another identifiable mark. In addition, its leaf blades are simple, with each node on the stem sprouting one leaf. The blueberry is harvested for human consumption, coveted for its high Vitamin C levels and deliciousness when baked into muffins and/or pies.