October 1969: Muskie ’36 speaks at Bates during the Vietnam Moratorium 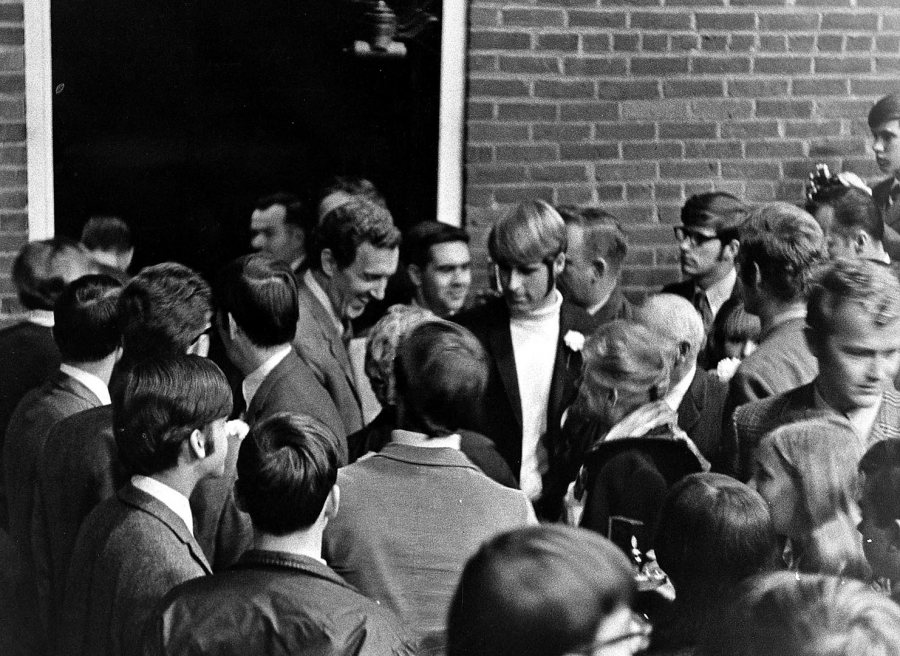 Bates students greet U.S. Sen. Edmund Muskie ’36 after his address on Oct. 15, 1969, in Alumni Gym on the occasion of the Vietnam Moratorium. (Muskie Archives and Special Collections Library)

The Moratorium to End the War in Vietnam on Oct. 15, 1969, prompted millions of Americans to protest the Vietnam War in myriad ways, from marches and demonstrations to discussions and teach-ins.

Around the country, war critics speaking out against the conflict were given instant international media coverage. This month in Bates history, leading Democrat Sen. Edmund S. Muskie ’36 returned to his alma mater to give his perspective before students, faculty, and the media in Alumni Gym.

“We are arrogant and mistaken if we believe that we of the Western world are the sole possessors of the yearnings which motivated our own revolution.”

Muskie made it clear that to speak about ending the war in Vietnam was not political blasphemy but, in fact, patriotic.

“A sense of responsibility for what we say and do should induce some caution, but it should not impose silence,” he said. “One of the most dangerous assumptions in a democratic society is to conclude that only the president, the cabinet, and his generals are competent to make judgments on the national interest.”

Muskie came to Bates because he believed the Moratorium was “a time for learning” and that he wished to “continue an education begun on this campus years ago.”

Noting three objectives for “a constructive policy,” Muskie said the U.S. should end the fighting, support a political settlement and reexamine its interests in Southeast Asia. 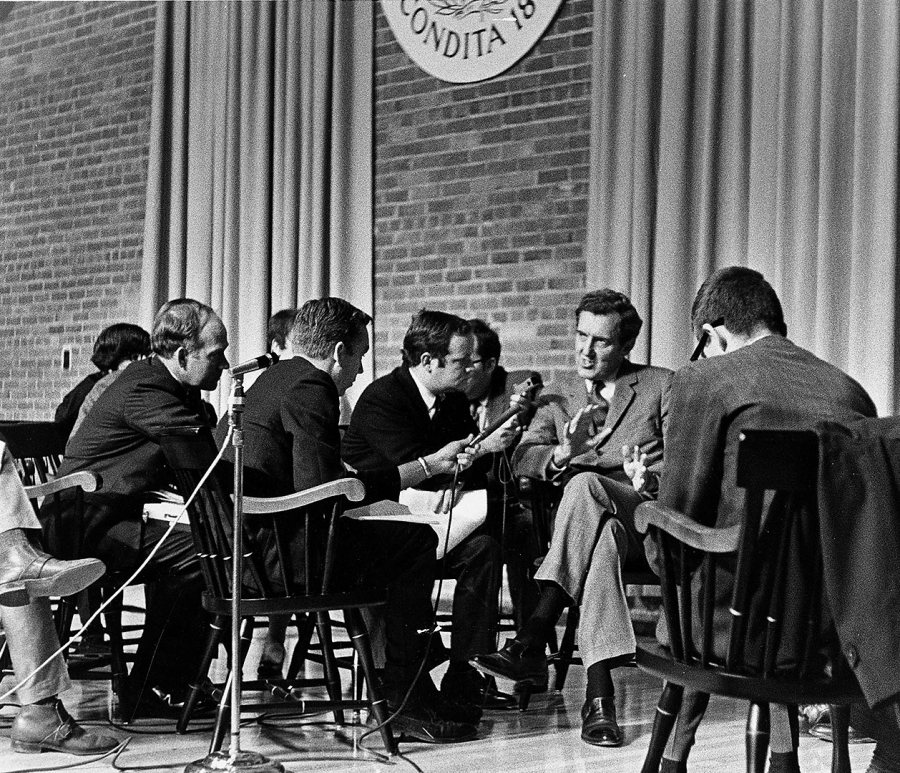 U.S. Sen. Edmund Muskie is interviewed by the media during his visit to Bates to deliver an address on the Vietnam Moratorium, Oct. 15, 1969. (Muskie Archives and Special Collections Library)

He concluded by telling the audience what he thought the Moratorium “means… I think it means that a very great number of Americans have decided that we should move much more vigorously than we have toward reducing our casualties, and toward ending the fighting and withdrawing from Vietnam….”

He added, “We are arrogant and mistaken if we believe that we of the Western world are the sole possessors of the yearnings which motivated our own revolution. It is not our national responsibility or duty to stifle or prevent these yearnings elsewhere.”

It is perhaps fitting that Bates College, noted for its sense of community, responsibility and participation, was where Muskie chose to make his points.

The speech garnered praise from some students who appreciated his concern for international interests. One student called it a “celebration of unity, not a protest against the war in Vietnam.” Another, however, mused with some cynicism that “bombs could be halted by cutting classes, that torture would be erased by a teach-in, [and] that our whole involvement in the bloody affair could be resolved by listening to a Senator speak.”

“We can only learn if we are willing to listen to each other.”

The Oct. 15 schedule included a Chapel dedication of the day to “Peace Action,” followed by the movie A Face of War. At 11 a.m. was a Lewiston-Auburn community march and rally, then a Chapel teach-in. After a resolution presentation and dinner came Muskie’s address at 8 p.m. Students, faculty and staff with ID cards entered the Alumni Gym through the men’s locker room side entrance for preferred seating, while the rest of the media and curious spectators packed in to witness the event.

In a way, Muskie’s speech typified Bates’ egalitarian roots and reinforced the College as a bastion of free thought. “I say that on the issues of Vietnam we have much to learn from each other, and we can only learn if we are willing to listen to each other and to reason with each other.”

Thirty-six years, students and faculty approach the classroom and perpetuate the spirit of Muskie. In an era when violence threatened to oust voices, a Batesie stood for the power of reason.